Submitted by Brett Baker on March 7, 2016.
Click photos to enlarge:

Craig Manister: Painting the Rhythm of Perception is on view at the Gallery of the College of Staten Island from February 22 - March 24, 2016. An inheritor of a post-war painting tradition that was already rigorously abstract, Manister has continually tested an "all-over" painting approach against a variety of traditions and genres. A reverence for both paint and subject runs throughout Manister's work, connecting his earlier abstract narratives and his more recent group of sensitively observed still lives. Special thanks to Siona Wilson and Craig Manister for permission to reprint the catalogue essay below.

Craig Manister: Painting the Rhythm of Perception
by Siona Wilson

As a child, Craig Manister knew that art was a special thing. This he learned, or perhaps intuited, from family trips to museums where he observed the look of wonder that crossed his father’s face. But he didn’t meet any living, practicing artists until he was in his 20s. Having entered Richmond College (consolidated into the College of Staten Island in 1976) with the pragmatic desire to pursue a business degree, the threat of being drafted into the Vietnam War propelled him to follow his long-buried passion: painting. If enrolling in college was a reason to avoid being conscripted into the military—at a time when your life was certainly in threat—then switching from business studies to painting was undoubtedly a double affirmation of life. This, in reality, meant life without a guarantee of conventional rewards and without the security of making a certain living from his art. But nonetheless, it was a pledge to an aesthetic life as a sustained kind of self-discovery through the rhythm of painting.

Manister learned what it meant to paint and to be a painter in the latter half of the 1970s, first while studying at the New York Studio School (1974-1976) and then through private guidance from Milton Resnick and Pat Passlof. Passlof was his painting instructor at Richmond College back in the early 1970s, and through her he was brought into a circle of likeminded painters (including CSI’s Tracey Jones). Passlof and Resnick came of age as artists in New York in the 1950s during the ascendancy of this nation’s first internationally recognized avant-garde art movement, the New York School of Painting. They were both affiliated with this movement and, in particular, with the Dutch émigré painter Willem de Kooning, with whom Passlof studied in the late 1940s. Craig Manister, Beachcombing, 1993, oil on linen, 24 x 32 inches (courtesy of the artist and the Gallery of the College of Staten Island)

By the time Manister joined this milieu in the late 1970s, the art world in New York was a very different place. Already by the mid-1960s, painting had lost its authority as the dominant artistic medium and instead galleries had begun to show much more heterogeneous experimental and sometimes politically and socially provocative work in new media (film, video, and photography), as well as confrontational live art and other kinds of participatory and performance-based approaches. In this context, traditional studio practice was, it seemed, obsolete. As the title of an important survey exhibition of abstract painting since 1970 puts it, this was the era “after the fall” of painting. 1

If the political despair of post-Second World War and McCarthy-era artists, such as de Kooning, Passloff, and Resnick, generated an inward looking, psychologically inflected humanist vision, the post-Vietnam generation had seen the groundbreaking gains and political optimism of the civil rights, feminist, indigenous, and gay rights movements. Together with the sharp polarization of rich and poor that was created by the “conservative revolution” of the Reagan-era during the 1980s, Manister’s formation as a young painter was betwixt very different social and cultural spheres. Craig Manister, Martyr, 2001, oil on canvas, 20 x 16 inches (courtesy of the artist and the Gallery of the College of Staten Island)

These larger historical factors of political and social milieu impact his painting only by very indirect means. Manister’s artistic worldview and method is underpinned by the humanist vision of the older generation, but his commitment to forging an individual practice is not hampered by the same kind of high-seriousness and obdurate self-belief often found with other painters working “after the fall.” This comes through most strongly in the flashes of humor seen in the quirky keyhole figure that emerges in the mid-1990s, see Beachcombing (1998) and the cartoonish saints of a few years later, for example, Martyr (2001).

This exhibition, Manister’s first retrospective, traces the development of his painting through a series of distinct and seemingly contrasting phases. The earliest works in the show date from the 1980s. Untitled 1 and Untitled 2 (both 1984) are “all-over” abstract paintings. This means that there is no particular area of focus within the composition, but instead the viewer’s attention moves across, or “all-over,” the whole surface. At this time, Manister was experimenting with the idea of drawing with the paintbrush, but not in order to circumscribe a particular space or form (as is typical with pencil or charcoal). Rather, as he would put it, to “maintain the plane” through a web or layer of rhythmically applied marks. The painted surface is made up of multidirectional strokes of paint that form a single uninterrupted picture plane. Although there is a desire to refuse visual depth (rejecting the spatial notion of the painting as a window onto another world), this surface is not leaden and impervious to the viewer. Rather, it is buoyant with energy. Helicopter (1985), a title ascribed after the painting was finished, offers a contemporary urban metaphor for the abstract affect created by Manister’s rhythmic mark combined with flashes of vivid color.

Lyrical Directive (1993) represents the next phase in his development, wherein the abstract marks begin to resemble some kind of script. Like an untranslatable language of hieroglyphic figures or runes, this series suggests a visual grammar of painted marks. Here, Manister’s work resonates with a significant aspect of the New York School, in its understanding of painting as its own form of language. But at the same time, this idea intersects with postmodern thought (from the 1980s and 1990s) that began to understand cultural forms through linguistic frameworks. New York’s older modernist tradition resounds in uncertain repetition with a much more contemporary set of concerns.

Carpet Ride (1991-1994) is a painting on which Manister worked intermittently for three years. And as such, it marks another important shift. Here, the ambiguous hieroglyphic figures seem to coalesce into a single recognizable keyhole form. Although the keyhole operates as a flat shape—rather than a portal, or hole into another space—this motif, when it becomes a surrogate for the human figure, introduces spatial depth in Manister’s paintings for the first time. In Beachcombing (1997), we are confronted by two green keyhole figures located on a clearly marked ground line and apparently in some kind of dialog or peculiar dance. If the earlier works maintained a lightness or buoyancy through mark and color, this has now become a playfulness that verges on the humorous. These figures are like strange actors or chess pieces in an absurd drama of their own. Craig Manister, Path with Figures and Trees, 2007, oil on linen, 48 x 36 inches (courtesy of the artist and the Gallery of the College of Staten Island)

Manister’s embrace of the metaphorical and allegorical aspects of painting intersects at this point with his first trips to Europe. After visiting Rome and Venice in 1998 and 1999, respectively, the keyhole figure morphs into a primitive saint. Martyr (2001) might bring on a wry smile in some viewers since the violence of a tortured Saint Sebastian-like figure is offset by the sweet quirkiness of the childlike form. But when the pinks and apricots of this diminutive character are translated into the monumental dark sibling of Icon (2000), we are more readily able to imagine the awe and fear of a distant time when Christianity was bound up with the violence of political power.

Manister was struck on these trips to European sights and museums as much by the anonymous Byzantine artists as he was by the Renaissance greats. But his “painterly” style—with its emphasis on the visible mark and texture of paint-as-matter—resonated most powerfully with the Venetian oil painters, such as Giorgione and Titian. While there is an emphasis on the energy of the visible painted mark underpinning all of Manister’s stylistic phases, this, in his own view, is always tempered by an engagement with modernist and postmodernist forms of classicism. This is not so much related to subject matter or narrative reference (i.e., to classical mythology) but instead it is more about composition and visual effect. Balance, structure, and stillness are consistent features across this whole body of work, from the all-over compositions of the 1980s to the lateral organization of many of the keyhole works. However, it is in the most recent series of still life paintings that this classical strain becomes most visibly evident. Craig Manister, Copper Pitcher, Jug, Cat Toy, 2015, oil on linen, 30 x 36 inches (courtesy of the artist and the Gallery of the College of Staten Island)

Painted under strongly directed artificial light using everyday synthetic objects—such as plastic fruit, paint brushes, and jugs—these observational works explore the qualities of balance, stillness, and structure that we associate with the classical composition. Manister began these paintings as a kind of empathetic pedagogical exercise. Observation, both from still life set-ups as well as the nude figure, is still a primary building block for teaching studio art. These still life paintings are a way of thinking through, and working out—with eye, paint, and brush—some of the challenges faced by beginning artists.

But in the practice of an established painter such as Manister, a return to the basics is also an affirmation of his own subjective approach to painting. We might see this through the metaphor of the personal journey with many side roads, unexpected turns, and with no fixed final destination. This retrospective offers an indirect circuit of repetitions, reversals, and deviations that gives form to Manister’s rhythm of perception. Craig Manister, Peonies in Glass Jar, 2012, oil on canvas, 12 x 12 inches (courtesy of the artist and the Gallery of the College of Staten Island) 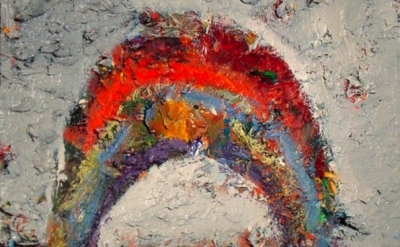 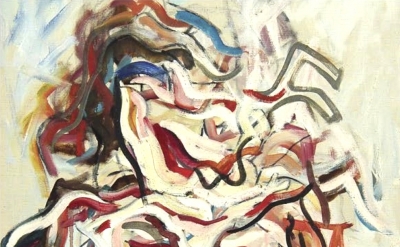 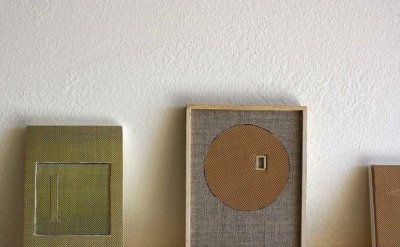