Submitted by Brett Baker on March 7, 2012.
Click photos to enlarge:

In his Theory of Colors, Goethe observes that "the greatest brightness short of dazzling acts near the greatest darkness. In this state we at once perceive all the intermediate gradations of chiaro-scuro, and all the varieties of hues." In Dark Matters, currently on view at Steven Harvey Fine Art Projects, the theme of darkness unites dazzlingly nuanced explorations of color and painterly approach in works by Ryan Cobourn, Arthur Dove, Andrea Belag, Bill Jensen, and Ellen Phelan. The superb selection of paintings spans nearly a century, adding a temporal dialogue to the mix. Painting darkness is a new and highly successful direction in the work of Ryan Cobourn, who has turned his searching, energetic brushwork from evocations of flowers and light on water to a sensate exploration of the indistinct. Painting the winter city at night, Cobourn embraces the challenge of observation in the absence of light. Masses of dark, uncertain forms are punctuated by far away lights - blinding touches that momentarily disrupt the ability to perceive the dark passages. Forced to actively focus and re-focus, neither painter nor viewer can locate forms with certainty, and Cobourn's paintings remain an active visual experience. They present the difficulty of seeing; darkness compels their forms and focus to remain constantly in flux.

Across the gallery hangs Arthur Dove's Music from 1913. For Dove, the difficulty of rendering forms in darkness proved a useful step in the early-modern march toward abstraction. Instead of painting sights, here Dove painted sounds - the Cagian cacophony of the night city. Dove’s sound-forms fan out rhythmically as their spiraling dark mass echoes, fills, and obscures a distant skyline. In Dark Abstraction (Woods), 1920, Dove paints a forest landscape hovering between darkness and light. He connects two worlds, representation and abstraction, through a shared palette of muted, rich color. On the opposite wall, Ellen Phelan's Autumn Bay, 2003, investigates a similar duality, but her painting, shrouded in a nocturnal mist, seems more like a reminiscence whose shadows derive from the vagueness of memory. Juxtaposing these works from different centuries underscores the concerns specific to each. In Phelan's 21st century painting the tension between representation and abstraction, so palpable in Dove’s time, has been demystified and become a thing of the past.

Other paintings in the show by Phelan, Bill Jensen, and Andrea Belag mine another lineage of dark painting, that of Goya and El Greco. In this tradition of dark painting, psychological tensions replace formal ones.

In Goya's "Black Paintings," relentless natural, supernatural, and historical forces condemn human beings to desperate acts and melancholic contemplation. In this exhibition, Bill Jensen's concerns align closely with those of Goya. Jensen's Sorrow and Optimism, 2006-12, confronts uncontrollable fate in the form of 9/11, ongoing war, and illness. The lower half of the painting evokes one type of void, a cold watery depth, while the upper half evokes another. The upper surface of solid, dusky violet is disorienting - one moment a taut plane and the next an infinity. This visual struggle recalls that of Goya's dog, whose struggling is faintly hopeful in the face of near-certain death. The eye likewise struggles to comprehend the close-value color and sheer physicality of Jensen’s Ape Herd VI, 2002-03. Its shale-like, tactile surface resembles nothing so much as activated carbon, a substance whose uses include purification and the filtration of toxins. Jensen’s paintings speak to a nearby work, Phelan's Untitled (two parts), 1979, where anxiety presents itself in oily blacks and somber grays. Encountering this painting is to encounter a reflected glare. The eye cannot penetrate the darkness save through a small cross, physically punched out of the aluminum support. The painting is an example of Phelan's early work which sought to reconcile painterly abstraction with process based minimalism, but in this context the cut surface feels more desperate, as if the painter were punching a hole through which to breathe.

Andrea Belag's Red Lantern, 2012, alone on the end wall is an electric return to pure color, seen through a veil of limpid blue violet. Calling to mind another of Goethe’s observations, that “blue in particular, can be made to approximate to black,” Belag's dark colors surround and amplify a spectrum of pure primaries. The jewel-like result is a celebratory, chromatic energy reminiscent of El Greco's energized supernatural spirituality, signified by darkness shot through with brilliant color. 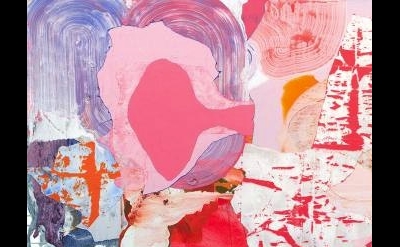 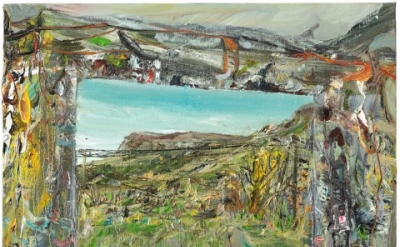 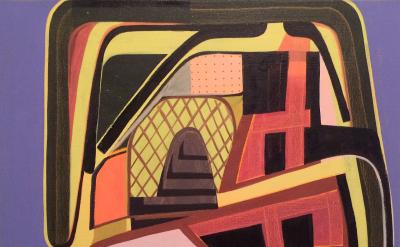