Submitted by Margaret McCann on January 1, 2017.
Click photos to enlarge:

Ann Gale: Portraits is on view at The Fralin Museum of Art at the University of Virginia from September 30, 2016—February 12, 2017.

“Ann Gale: Portraits” - at the Fralin Museum (University of Virginia) through February 12th - portrays, more than individual likenesses, encounters between painter and sitters. Like many contemporary figure painters, Gale revisits turf opened by post-Impressionists and early modernists, before the nude’s role in western painting was further degraded by extreme political adaptations, then repressed by just critiques of its objectifications. Gale’s semi-clad people have names and gaze back with psychological agency, almost resisting their not quite comfortable environments. Yet her enterprise is foremost a formal one: imagery takes shape with constant reference to the matrix of the picture plane. Renewing Mondrian’s evolution from trees to abstract axes, Gale’s naturalistic investigations venture on and off the grid. 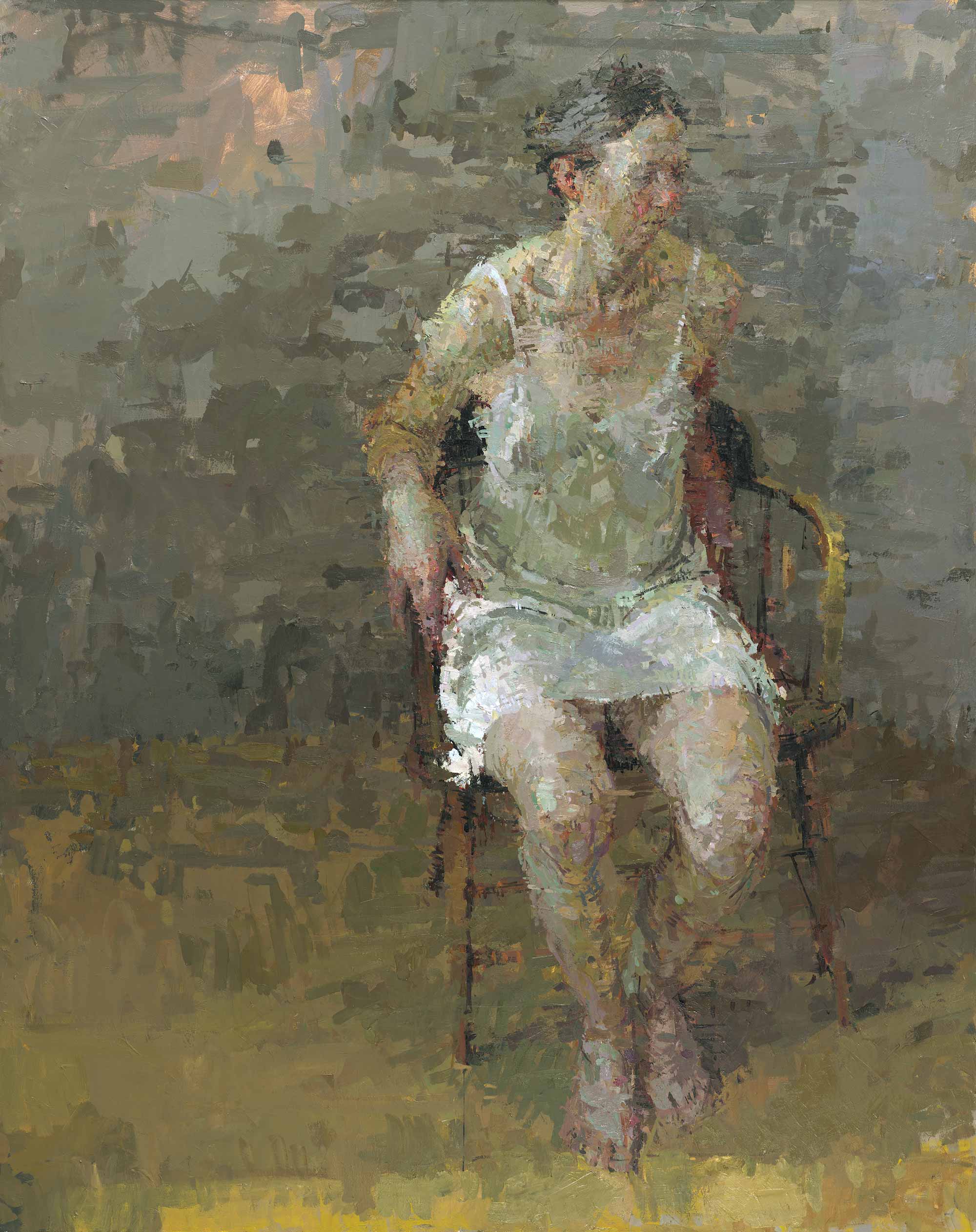 An uneasy energy rebounds between models in minimal, shallow spaces and their fragmented but cogent description. Off center in a plain white slip, “Rachel” leans forward, face averted. Despite the gravity of a solidly defined lap, strain in her precisely suggested back elbow edges her off the seat. She stays in place, braced by a rug-like patch of yellow ochre light under her hovering feet, and an upper left aperture of luminous pink ground she could almost be turning away from. Lines around her lower legs indicate directional volume, while swatches on her feet-tops bend to the picture plane. Tension between flatness and depth is polite and poetic - softening the nervousness Gale’s figures might otherwise convey. Careful exactness, like each small part of Rachel’s elegantly perceived right hand, calm.

Gale’s dappled textures echo avant-garde painting’s detour after photography demystified the “high finish” of academic painting that long awed with mirror-like apparitions. Painters used grids to transfer smaller sketches to large formats, as painters working from photography or projection today often do. But the Impressionists dispensed with such preparations, capturing transient color-light directly. Likewise a perceptual painter, Gale's performative process communicates optically and haptically, as though the viewer eyed the motif and held the brush. (Digitally, the suggestion of a camouflage pattern and of pixelation, and thus irony, is stronger than “in the flesh,” where the paint’s physicality dominates.) Reminders of the grid assert painting as a field of experiment as well as experience. 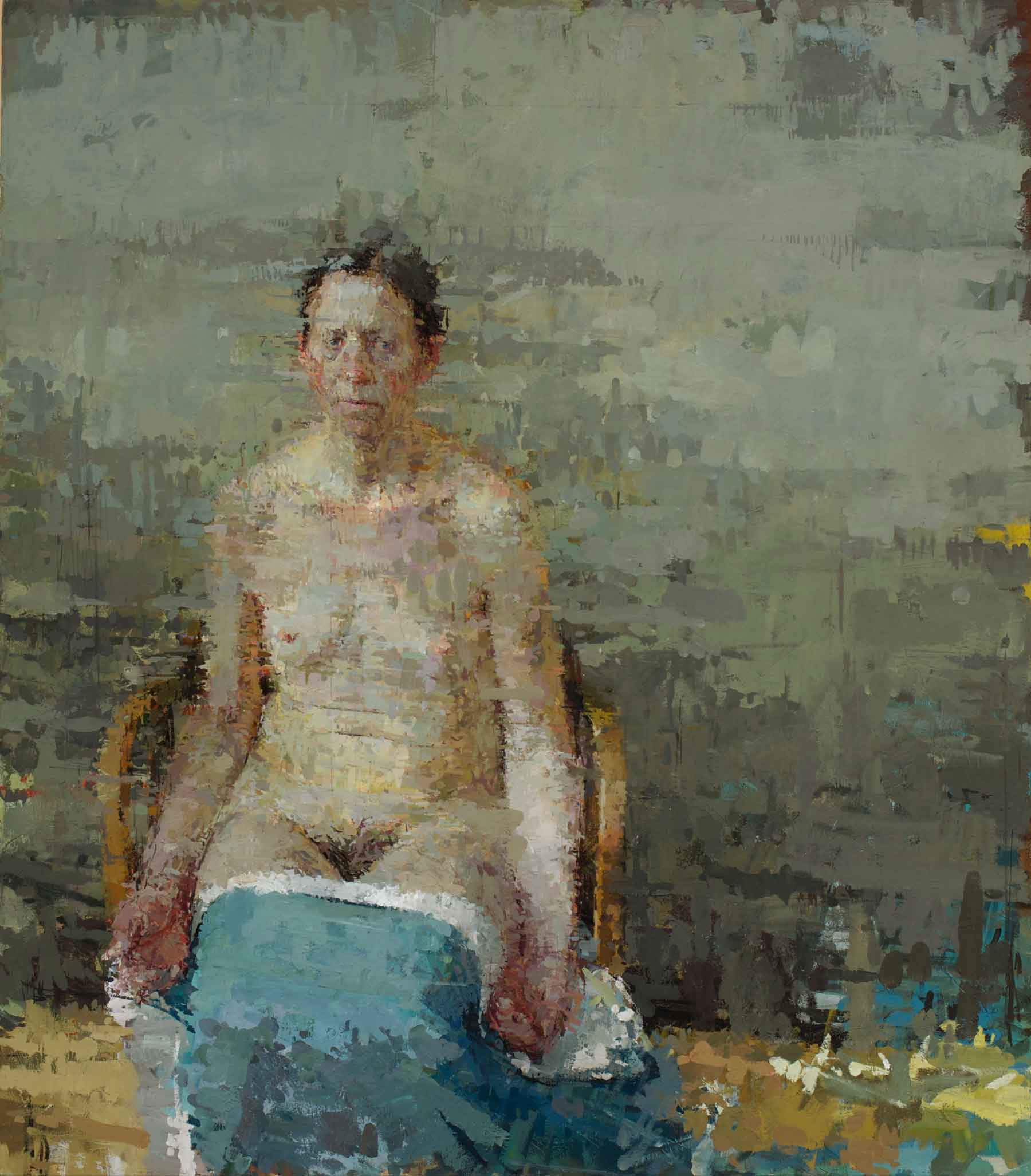 The visage in “Rachel with Blue” is piercing and even perturbed, a reaction perhaps to the awkward pose – palms up, almost Christ-like, pinning down a blue cloth below her crotch. But this affect holds little sway over the dialectics of horizontals and verticals scuttling across the surface, reversing negative and positive shape and coalescing into description. The warm pacific hue weighting the bottom is accented by nearby bursts of color. As color choices are assessed, similar shades are left like a housepainter might test samples on a wall. In close shifts (which Ingres considered the most beautiful aspect of color) they slowly amass into harmonies. Even impulsive moments in broken color abide Gale’s detached, Divisionist-like filter. Slower than Giacometti but faster than Milton Resnick, textures accrue incrementally into surface plasticity and, as Cézanne showed, impart the history of the image’s making over time. 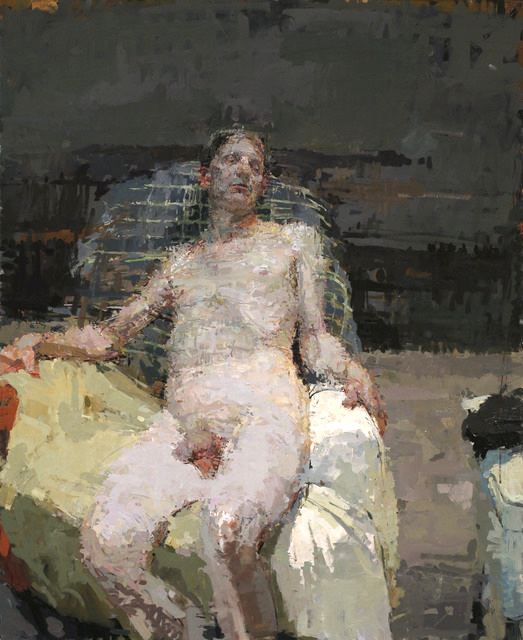 In “Robert with Skylight” the model’s grip on armrests anchors his ungainly position. His alert air suggests resignation to this discomfort. Like Lucian Freud (sans his even analysis), nakedness - earthiness and vulnerability rather than timeless nudity - is portrayed. Gale paces our attention by manipulating atmospheric perspective: quickly passing over vaguely articulated foreground forms – cloth, object on table, thighs, genitals, chest. Small, specific marks scrutinize the face, whose eyes seem to have just turned away. Behind Robert’s head, a textile’s fine lines align with active but relaxed, large, flat warps and wefts on the wall, rhyming with and returning to the picture plane.

Where definition is indistinct, the interval from mark to illusion is enhanced, made explicit in the title “Shawna in Lines.” The plaid couch weaves into an axial web of loose, frayed brushwork covering the surface. Like shredding fabric some lines break free, one left of her navel looking more allegiant to the purity and veracity of a plumb line than to any mirage. As forms follow arcs, synthetic perspective (our naturally curved vision Leonardo explained) is inferred, further questioning appearances. The persistent problem Gale’s fine paintings occupy - simple abstract absolutes, multiplied by the complexity and challenges of perception, minus deceptions of illusion - is again richly underlined, fortifying the figure’s return after a wayward 20th century run.

The Fralin Museum of Art’s programming is generously supported by The Joseph and Robert Cornell Memorial Foundation. 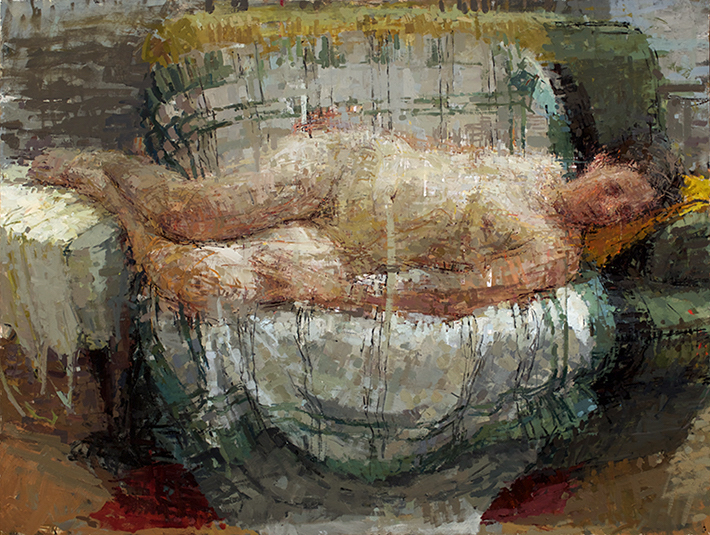 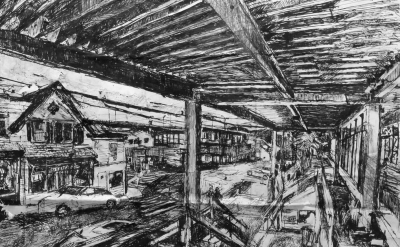 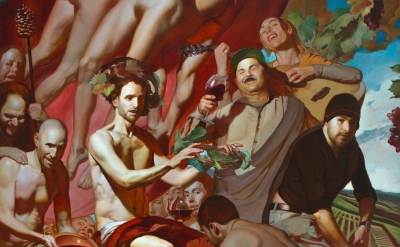