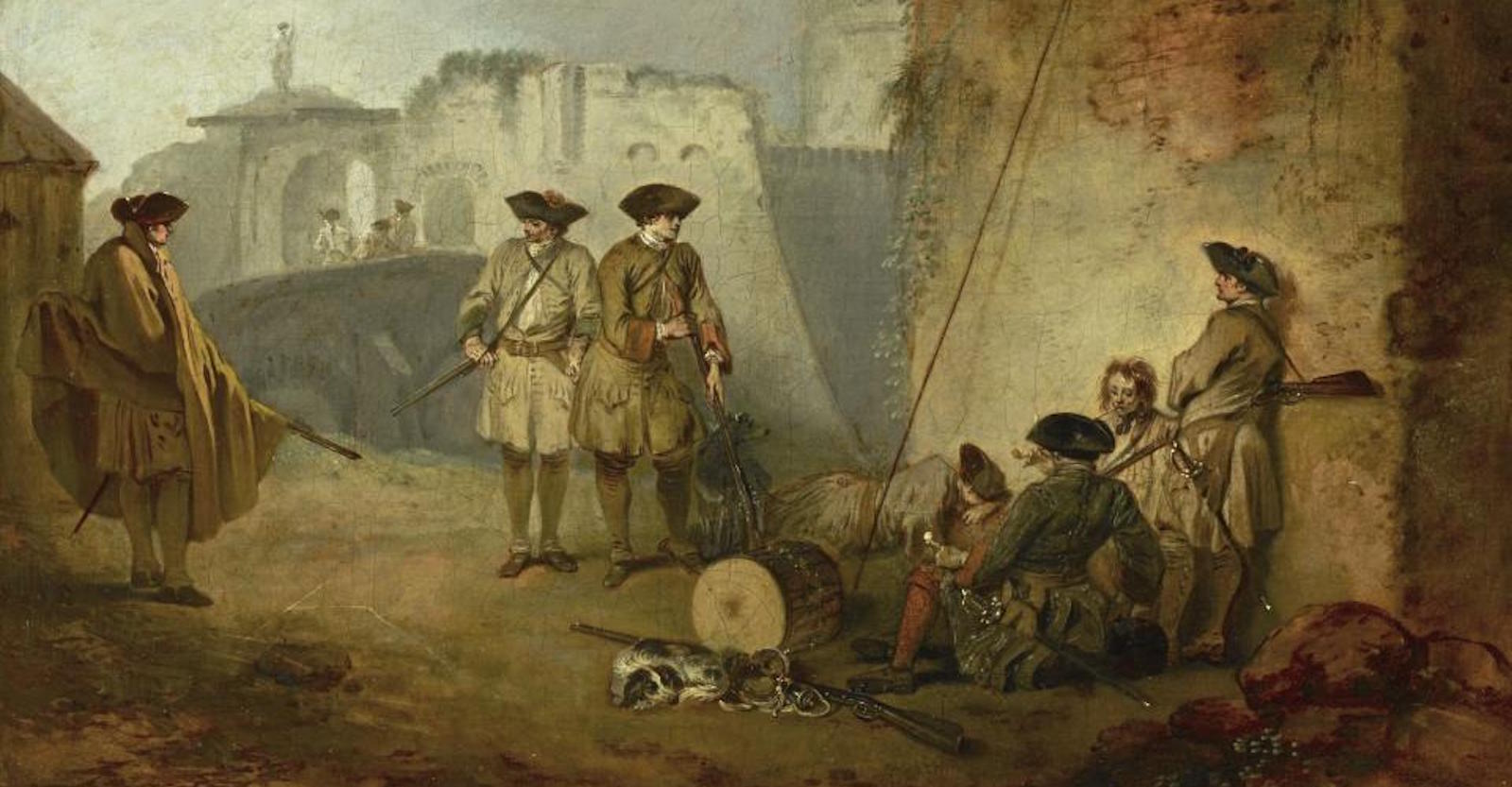 Submitted by Henry McMahon on July 28, 2016.
Click photos to enlarge:

Watteau’s Soldiers: Scenes of Military Life in Eighteenth-Century France is on view at The Frick Collection, New York from July 12, 2016 to October 2, 2016

“Watteau’s Soldiers: Scenes of Military Life in Eighteenth-Century France,” now on view at the Frick Collection, presents twenty or so works created around the War of the Spanish Succession, an early subject for an artist far better known for his fêtes galantes, those rich scenes of courtship and masquerade that catalogue an entire Baroque iconography. In articulating this world of bourgeois pleasure, Watteau gained admission to the French Academy and a place among the greats of the western canon. Given his stature, and because it is for works other than these that Watteau is best known, this exhibition is especially rewarding since it allows for a clear-eyed appraisal of a painter on the cusp of making his greatest works.

Watteau is thought to have created seven paintings around the war, four of which—The Line of March, ca. 1710, The Halt, ca. 1710, the Frick’s own The Portal of Valenciennes, ca. 1710-11, and The Supply Train, ca. 1715—provide the meat of this exhibition. In addition to these are about a dozen of the artist’s preparatory drawings, an etching, an etching and engraving made after him, and a handful of drawings and paintings made by his contemporaries Jean-Baptiste Joseph Pater and Nicolas Lancret, and a predecessor, Philips Wouwerman, whose Cavalry Camp, 1683-68, also belongs to the Frick.

The four military paintings are fascinating, and they are the real reason to see the show. The big question that surrounds them is their relationship to the bona fide masterpieces that would follow: The Love Song, The Surprise, The Embarkation for Cythera and The Shop Sign of Gersaint, among others. In such pictures, the drama of human interaction is keyed up to its maximum intensity; every incline of the head, reach of the hand, every jaunty step or crossed leg is so pregnant with meaning that gesture itself becomes the language of human experience. In Watteau’s world, more than in any other painter’s, figure to canvas is as actor to stage. 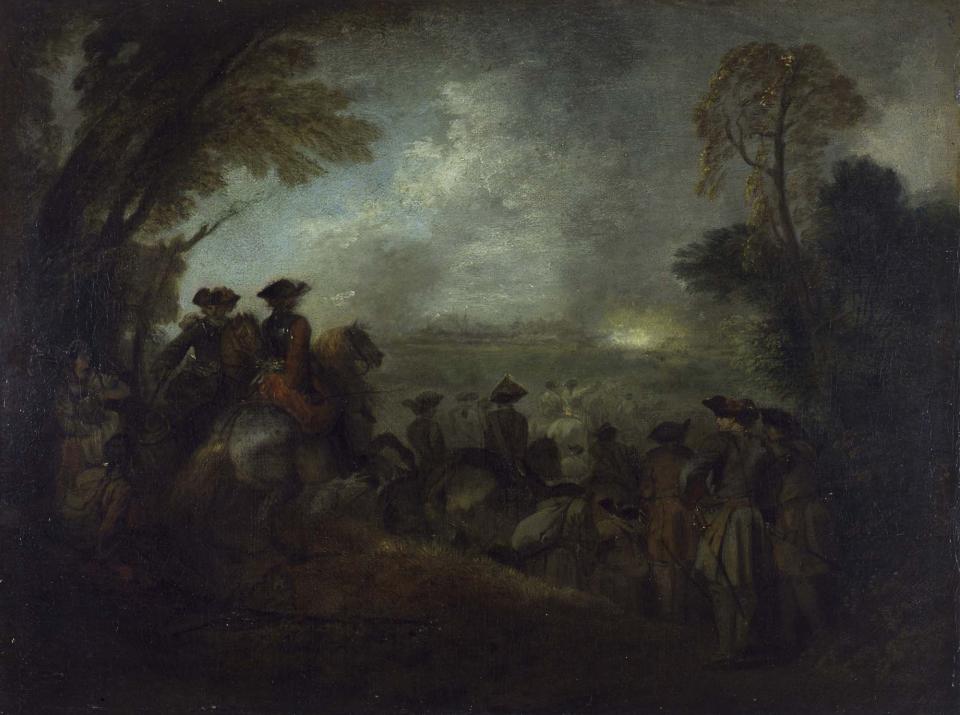 But how does he achieve such a heightened sense of drama? Why are we pulled so irresistibly into a world where nothing happens other than a man playing music from a sheet held out by the woman at his side?

There is an ekphrastic quality to the fêtes galantes in which the sense of performance is enhanced by the painter’s use of the devices of theater. This is most obvious in Watteau’s figural arrangements; the lead roles occupy the near ground, and supporting characters gather around. The effect is of the entire ensemble gathering in a pre-arranged spot to witness a human drama—often a love affair—play out before their very eyes.

Watteau’s chief dramatic device, however, is light. In Watteau, as in theater, light points to the drama. It picks out the main players, distinguishing them from the bit roles on stage. But the quality of this light is utterly unique; suffusing each scene in its warm glow, Watteau’s light has no obvious source.

It is interesting to see the very same principles of composition and qualities of light at work in Watteau’s military pictures, with results so similar to the fêtes galantes that one realizes in an instant that it’s the complexities of human interaction, not the circumstances that occasion such interaction, that is Watteau’s real subject. 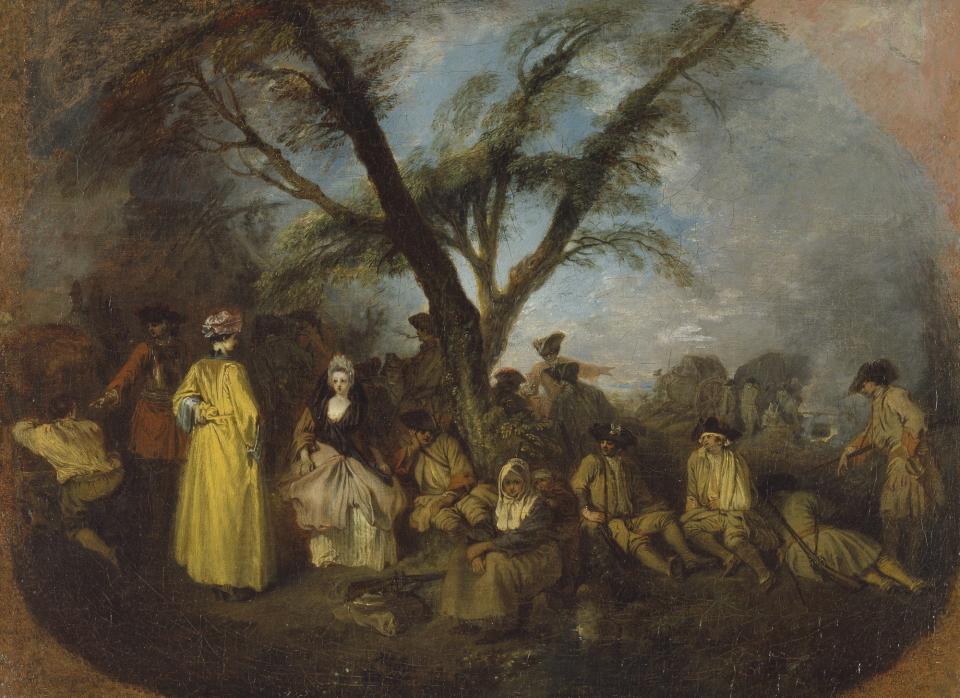 In the military pictures war is a context. The Supply Chain and The Halt are set some distance from the front lines, a setting within which characters enact their everyday dramas of need and desire. In The Halt, a group of soldiers rest around a tree, the smoke of cooking fires colluding with the grey clouds overhead to shroud them in half-light. A frieze of ten figures extends across the picture from left to right, each one lit by a frontal light that casts them in relief from the world around them. Each is utterly absorbed in the social life of his or her companions. It’s as if physical distance allows for an emotional distance from the violence, and the horrors of war take a back seat to more pressing matters: Who tends the cooking fire? Who unbridles the horses? Who will go to bed with whom?

The Portal at Valenciennes depicts seven soldiers gathered around a gate, while smaller groups guard a bridge and other fortifications in the middle distance. The main group forms a loose circle, each facing the others. What is remarkable about this picture is again Watteau’s use of light, which emanates from the center of the group, bathing each figure in its glow. It seems generated from the interaction among them, and it spills out onto the wall of the gate and the ground nearby. The setting might be wartime, but it’s a picture of deep warmth and camaraderie. 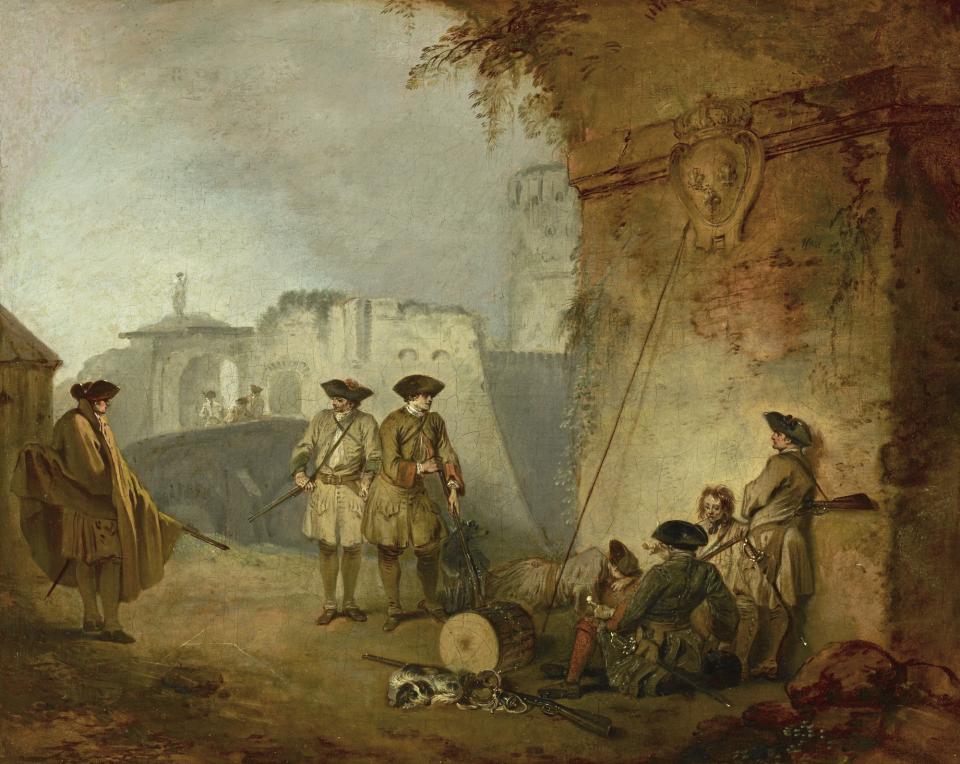 On Watteau’s stage no one is solely himself; each is partly a reflection of the demands and expectations of others. This is why his people are never allowed complete privacy. Even the conditions of courtship are subject to role-play—the man plucks a chord, the woman swoons—each enacting a role to meet the expectations of those who watch them. In this sense, every action is a pantomime. The role-play that comes as a precondition to all interaction is no less a reality for Watteau’s soldiers than for his actors and lovers. They exist in the light of their own interactions.

That Watteau apparently had little use for the naturalistic depiction of light is borne out by the drawings, in which heavier groupings of lines do not so much denote shadow as they do points of particular interest or visual complexity. Here Watteau shares something with Degas, whose dancers are also marked by mysterious areas of shade that do not correspond to the light in which they move. These are drawings that get knotted up in the creases—of a knee, of an elbow, where pants are constrained by a belt—and they feel truly utilitarian as a result. In contrast to the drawings of van Dyck, which most recently occupied the same gallery space, Watteau’s drawings contain nothing of the mood of his finished paintings. Whereas a van Dyck portrait could well be said to be the color transcription of its corresponding drawing, this could never be said of a Watteau. Perhaps this is a testament to the true artistry of the paintings, which might borrow something concrete from the drawings, but take their real subject from somewhere else entirely. 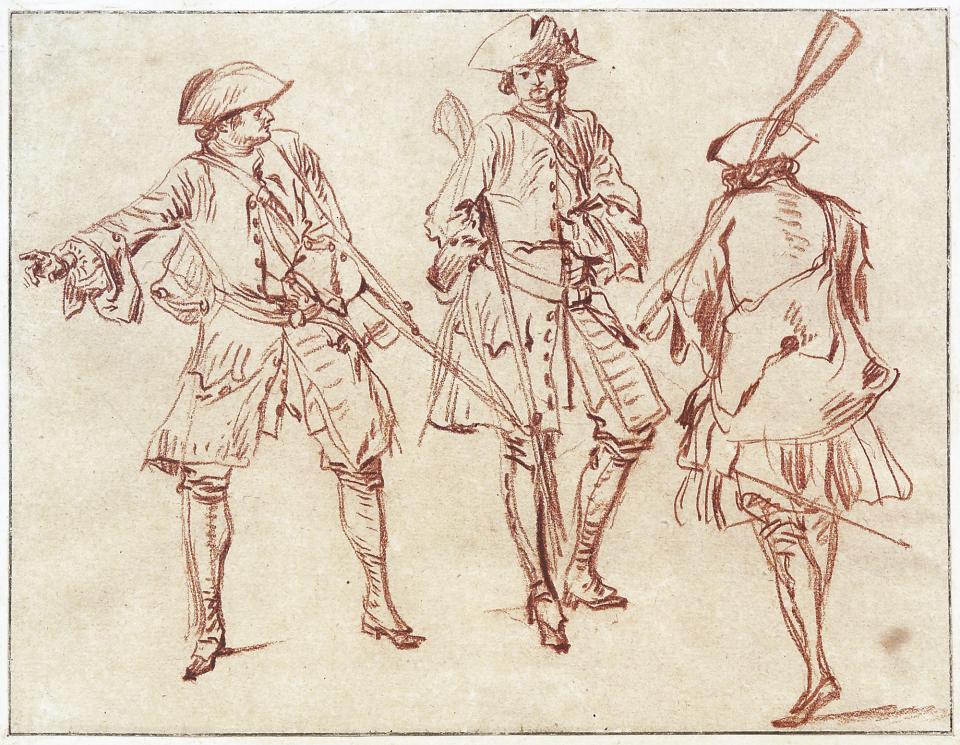 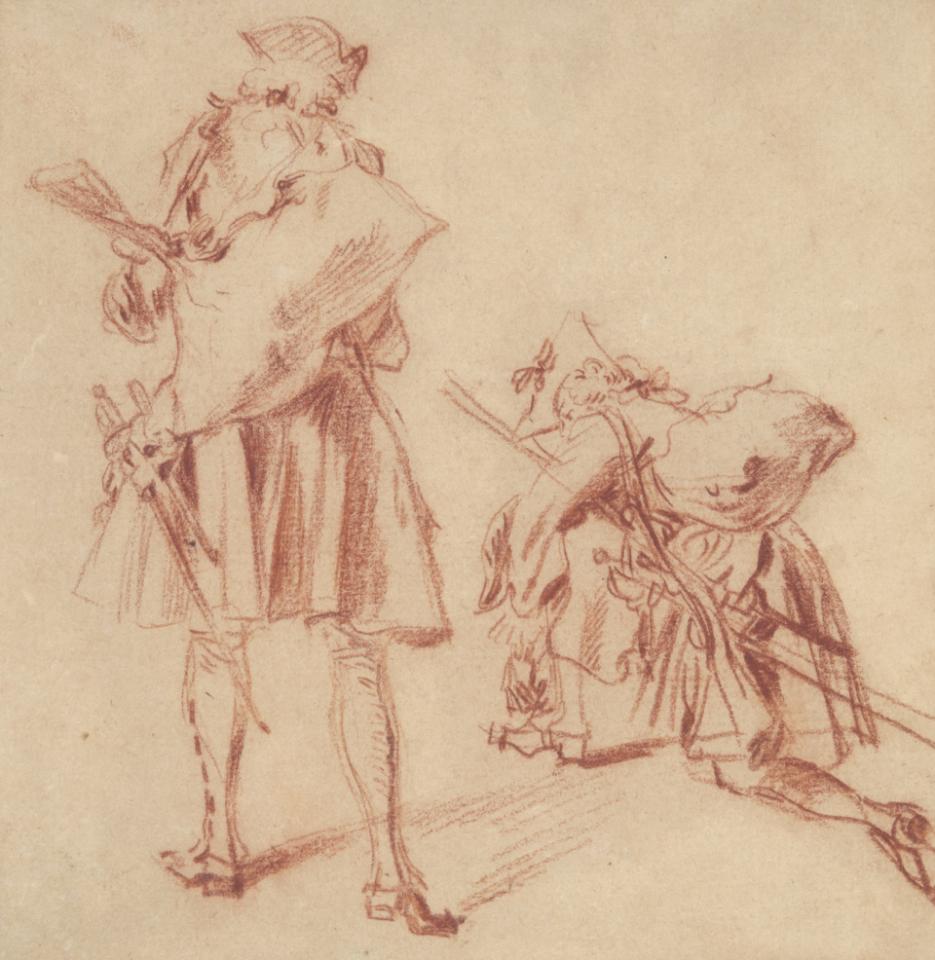