Submitted by Xico Greenwald on June 18, 2013.
Click photos to enlarge:

Two recently opened downtown exhibits bring together artists with much in common, as well as contrasts that, when seen together, allow for deeper appreciation of their respective works. Like Li’s landscapes, Achheim achieves a sense of light and atmosphere in her geometric abstractions. Blue Before Orange (2012), combines an icy, overcast blue-grey on the left with an aqua-colored rectangle on the right. Against this background, long orange and indigo lines, placed like pickup sticks or lantern poles in a Kanto festival, make for a compelling image. Steel and Soaking (2013), contrasts dark, inky purple triangles against a white ground, nicks and scratches here and there revealing multiple layers of color beneath the smooth, white surface. While Aschheim makes studio paintings, Li battles the elements, working outside, moving huge amounts of oil paint on large canvases, even in the dead of winter. Winter Lilies of Hanover #2 (2012), made during a residency at Dartmouth College, has lovely muted oranges applied with a 4-inch-wide housepainter’s brush. Runny drips of turpentine, thick blobs of paint and even the cap to a paint tube have made their way into this no-holds-barred landscape. An oil paint meringue, Wintry Maple at Night (2008-09) has paint as thick as the canvas it’s on. Here the arbor of a tree in the foreground frames a maple in the distance, a moody scene.

‘Street Figures,’ a two-person show at Tom and Jerry’s on Elizabeth Street, pairs Simon Carr’s sketchbook pages and Michael Putnam’s photography. Putnam, a native New Yorker, has travelled widely for photography projects, including a series of images chronicling small-town movie theaters and ‘Sleep,’ a book of photos capturing public dozing in countries around the globe. Here Putnam stays local, taking close-up pictures of the city’s scarred asphalt surfaces. Carr, a New York City-based painter, is an old-school artist, sketchbook always at the ready, drawing with a heavy graphite line and adept hand to capture an urban environment alive with inspiration. Carr’s 14 drawings, made on subways and at city parks, are mixed together on the wall with Putnam’s 12 photographs of pavement. Capturing drips, spills and cracks, Putnam’s essentially abstract black and white photographs have similarities to Carr’s drawings in composition and tonal structure, in one pairing a sidewalk’s cracks uncannily echoing Carr’s loose graphite lines. And the drawings and photos here are the same size, causing a double take as viewers look for figures in Putnam’s pictures; a pothole looks like the Venus of Willendorf. A handful of Carr’s sketches here depict subway riders absorbed with their smartphones. But Carr’s works are not sanctimonious, the characters in his drawings expressing humanity even as they tune out. Carr quickly gets down poses begging to be painted. Likewise, Putnam’s close-ups of the city’s walkways are like modern fossils, footprints and oil stains beautifully preserved, both artists eternalizing a fast-changing world.

In these two-person art exhibitions, it is both similarity and difference that makes for rewarding shows, distinct artistic visions informing and enhancing the other. 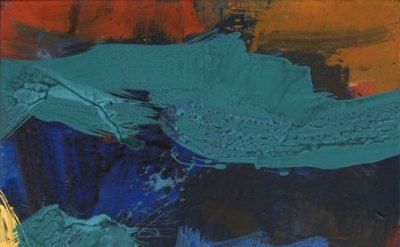