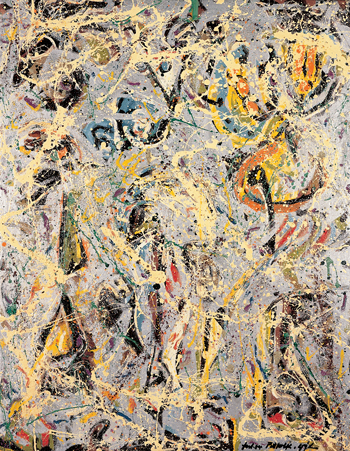 Robert Linsley considers the both literary and spatial issues in the paintings of Jackson Pollock.

Linsley begins: "Today, the stature and importance of Jackson Pollock’s work is taken for granted, however, critical interpretations of his work have not changed much since the sixties. The formalist line of Clement Greenberg is pretty much entrenched in academia, and its basic outlines are well known. The expressionist line, from Harold Rosenberg through Alan Kaprow, has perhaps had more influence on practicing artists, although it is generally out of favour among critics and art historians. In addition to these two main traditions there is a Jungian faction, also venerable, and the recent 'hidden figuration' theories of Pepe Karmel, presented in the catalogue of the last retrospective, but these latter have the drawback that they treat Pollock’s work as if it were analysable in the same way as any historical figure painting. If his work is as important for abstraction as many of us would like to think it is, surely it must demand something more innovative from criticism. I would like to make two modest contributions to the discourse. Firstly, to suggest that Pollock’s work is both abstract and completely literary. It is this way because the gesture of reduction that Pollock makes itself has very old literary antecedents. Secondly, I would like to propose what I think is a fresh, if not in fact entirely new, way of looking at the lines, forms and spaces of the classic drip paintings."