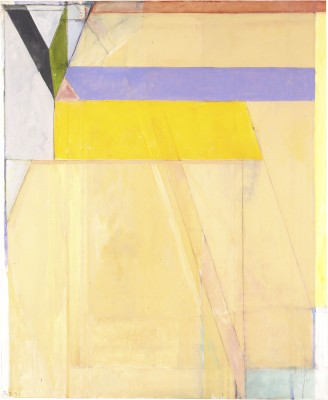 West recalls his first exposure to Diebenkorn's paintings at the Whitechapel Gallery in 1991: "A door was opened and it dawned on me that here was an approach to painting that was both measured and free – on the one hand the geometric structure was alive, dynamic, felt, and on the other the freedom of brushwork and colour was intensified through containment. These paintings were rigorous in their abstraction and presence, while expressing a sublime feeling for landscape. They seemed to epitomise for me painting in its purest sense, and I was compelled to explore what he was doing through my own work. The geometry was important, and in the first paintings I would rule out a grid as a starting point, but this was something to work from or against. The key seemed to be in the extent to which one could dissolve or rework statements, placing more emphasis on the process of search rather than accepting something as final too soon."