For the Love of Gene Davis 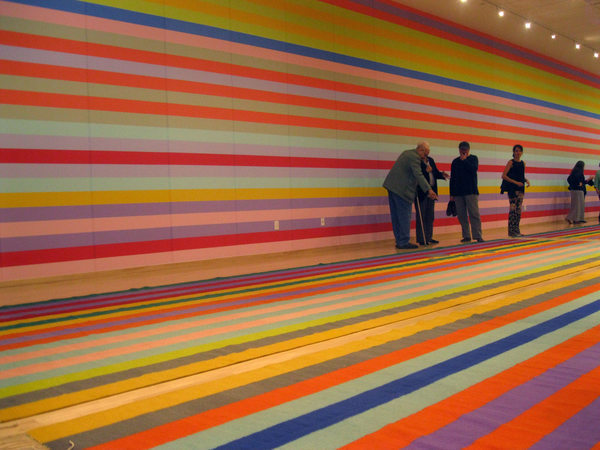 View of installation by Polly Apfelbaum in For the Love of Gene Davis at Temple Contemporary, Philadelphia

Noreen Kress reviews the exhibition Polly Apfelbaum + Dan Cole: For the Love of Gene Davis at Temple Contemporary, Philadelphia, on view through July 11, 2014.

Kress writes that the "two-person show [is] grounded in the work of American painter Gene Davis, who in 1972 created 'Franklin’s Footpath,' a 414-foot-long striped painting on the Ben Franklin Parkway in front of the Philadelphia Museum of Art... Apfelbaum’s installation consumes the viewer upon entry into the gallery—the entire room is quite literally a painting. Floor-to-ceiling wallpaper, in broad and vibrant horizontal stripes, wraps around the entirety of the long, rectangular space, accompanied by four rugs of the same pattern. The monumentality of Apfelbaum’s work alone reflects the show’s basis in Davis’ large-scale work... Apfelbaum evolved the horizontal paintings in this show by allowing them to be walked on–a format inspired by the experimental nature of, and pedestrian access to, Davis’ work... In Cole’s work, three projectors flood the painted walls with moving pictures; one shows a scene from the 1971 film 'Harold and Maude,' while the other two show the same film of Gene Davis painting his much-referenced work. To Cole, the influence of Davis’ enormous, endless stripes manifests in the projected scene from 'Harold and Maude,' offering two anchoring moments of the cultural era from which Cole and Apfelbaum are drawing." 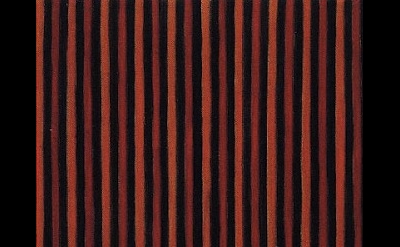 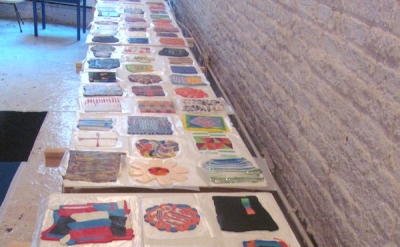