Porfirio DiDonna: The Shape of Knowing 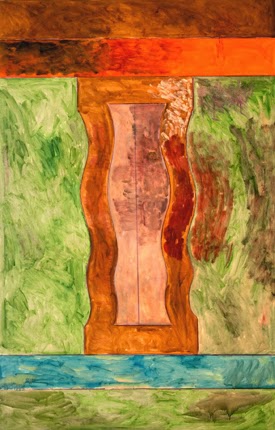 Parks writes: "Upon entering the museum we are wowed with a suite of the late paintings, large ones, that sweep across the space and capture our attention in a dizzying display of what can only be described as painterly pyrotechnics. Boom boom boom boom boom! On the panorama of the expansive curving back wall of the central gallery each painting like dominoes plays out the explosive climax of Porfirio DiDonna's vision for life and art and the divine. It redefines awesome. It is at once the stained glass of Notre Dame, the mosaics of Hagia Sophia, the Parthenon, the flags of the Palio di Siena, all in powerful, radiant, lucid, magnetic, rapid fire oil paint. Call them part vessel, part icon, part doorway to another world."