Fyfe describes Hantai's technique of "pliage": "In pliage, the painting's canvas surface, previously treated with poetic delicacy, was instead subjected to a methodical violence: scattering blobs of black paint over its face, letting it dry, crunching it up, painting on it more before it was mounted. Most importantly, pliage became a kind of painting method that could be realized with only an inconstant surveillance of the artist's eye. As the art critic Carter Ratcliff put it, Hantaï mixed 'the clarities of vision with the intuitions of touch.' " 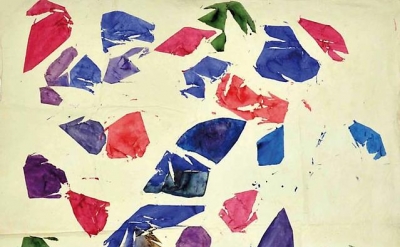