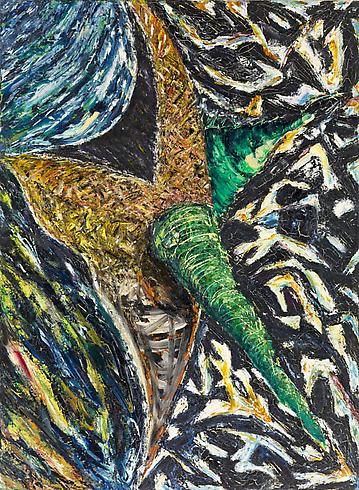 Joan Waltemath talks with Raphael Rubinstein about the exhibition Reinventing Abstraction: New York Painting in the 1980s, a show he curated at Cheim & Read, New York, on view through August 30, 2013.

Rubinstein comments: "One of the things that inspired my show was David Reed’s notion that there’s a 'street history' of painting that painters share with each other, a set of references and concerns, and a sense of where they’ve come from and where they’re going. This street history almost never gets into official versions. Art historians and museum curators don’t seem to have much interest in it. The other thing that really hit me was an Art in America review by Carrie Moyer of the last show Stephen Mueller did before he died. She wrote that Mueller and a number of other painters were the 'generation that essentially reinvented American abstract painting in the 1970s and ’80s.' I knew immediately that this must be true, especially because it was a painter I respected who was saying it. I also realized that this was a history that hadn’t been told. Even though most of the painters in my show are quite well known, they’ve largely been left out of the official histories of the 1980s because they don’t fit into Neo-Expressionism or Appropriation Art or Neo-Geo."