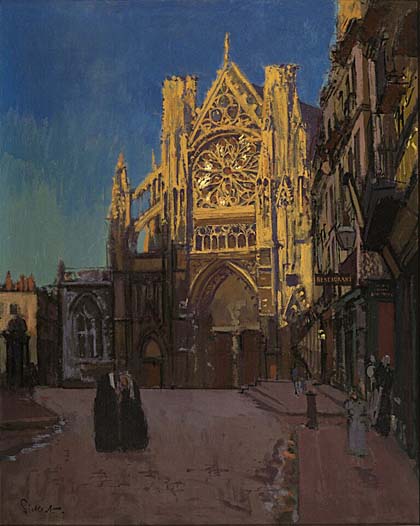 Mark Sheerin speaks to curator Katy Norris about the exhibition Sickert in Dieppe, on view at Pallant House, Chichester through October 4, 2015.

"The 25-year-old Sickert was an apprentice of Whistler. But in Dieppe he fell under the influence of Degas... It was Degas who felt himself to be the better role model [than Whistler] for a young painter and, given the place he holds in art history, we might today agree. Sickert 'learned draftsmanship from Degas and watched minutely what he was doing'. The older painter, in turn, 'really thrived off that idea of a young artist still interested in what he had to offer'. But Sickert never abandoned the expressive lessons he learned in Whistler’s studio. 'He loved the viscosity of the paint and using rich paint, which was not like Impressionism,' says Norris. 'So he never really sat totally with the impressionists; he hung onto his beginnings all the time as well, you know, the early training under Whistler.'"