Jo Baer: In the Land of the Giants 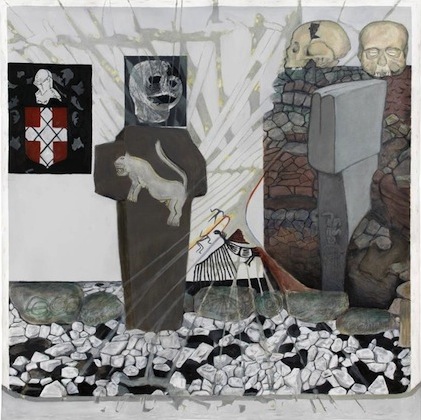 James Cahill reviews the exhibition Jo Baer: In the Land of the Giants at the Stedelijk Museum, Amsterdam, on view through September 1, 2013.

Cahill writes: "Indeed, the exhibition reminds us that wandering, whether between continents or representational modes, has been a defining aspect of Baer’s life. Over a career spanning seven decades, Baer has come a long way from her beginnings as a pioneer of Minimalism in the US in the 1960s... In recent decades, Baer has consistently straddled personal and cosmic registers. In a diaristic catalogue entry, she refers to the ‘epic, colonial land-hopping’ in the early days of human society, which is ‘still marked by continental intrusions in the form of earth mounds, megaliths, and heavenly measurements systems.’ Such ancient systems, with their covert and ranging allusions, have an arcaneness that her latest works frequently share. In their promiscuous allusions, her compositions can appear as recondite as antique emblems or cryptic crossword clues. In Heraldry (Posts and Spreads) (2013), a coat of arms nestles within a larger tableau of skulls and rune stones. It furnishes an apt metaphor for the series in its entirety – compressed and encoded, dually figurative and symbolic." 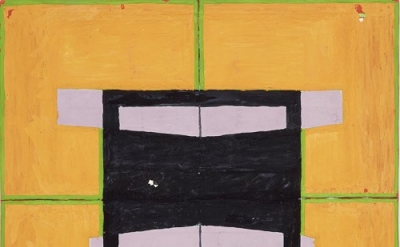