Marlene Dumas: The Image As Burden

Rachel Cooke profiles painter Marlene Dumas on the occasion of her retrospective The Image As Burden which will be on view at Tate Modern from February 5 - May 10, 2015.

Cooke writes: "Early on, [Dumas] worked in collage as well as paint: The Image As Burden includes several examples... By the mid-80s, however, she’d given herself over to paint, and in particular to portraits. These portraits, painted from photographs, often news clippings, rather than life, fall into two groups: the living and the dead, the anonymous and the famous. But her palette is consistently ghoulish, her subjects’ bodies bruised and bent, their skin a liverish green or a gallows blue. Here are swollen pot-bellies and ribs that look like xylophones, wattled chins and twisted – even broken – necks. Some hold extremely graphic sexual poses. Others are blindfolded, or bound in duct tape. And every so often, there comes, transfixingly, a notorious face: Osama bin Laden, Naomi Campbell, Phil Spector with wig, and without. Dumas’s portraits tend to be contextless, her subjects’ faces and limbs floating disembodied, arranged for maximum drama on a washed-out backdrop." 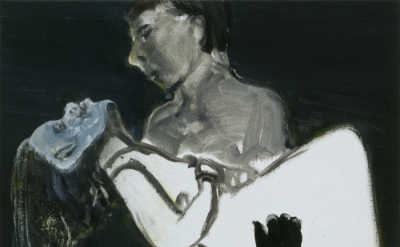