Indian Space Painters: In the Shadow of Ab-Ex

Goodrich writes: "Seeking an innately American response to Cubism and Surrealism, artists such as Steve Wheeler, Peter Busa, and Robert Barrell began in the late 1930s to combine elements of Native American and pre-Columbian art in mosaic-like abstractions. Their pulsating compositions, often laden with symbols, melded object and space, subject and myth... Most compelling, however, are the six works by Wheeler... There’s nothing else quite like Wheeler’s paintings. One encounters the same pressured intricacy, perhaps, in a painting by Bosch, or even early still lifes by Juan Gris, but the rhythms of both of these masters seem tempered by a wise, ennobling hierarchy of form. Wheeler’s work is different, and indeed unique, restlessly surging against his own relentless control. It’s the vision of a modern-age shaman, made palpable in color and form."

Steve Wheeler: Close to a Prophet 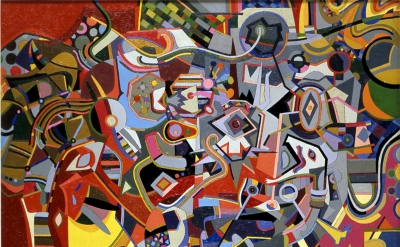