Painting on the Cusp 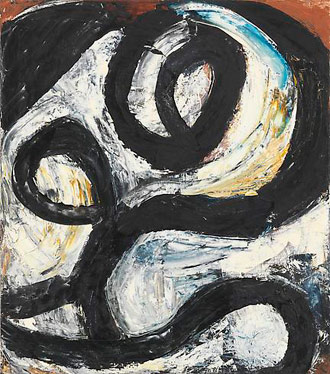 Examining the show in the context of curator Rubinstein's previous critical interests (particularly Rubinstein's coining of the term 'provisional painting') Micchelli writes that "the genome of this generation of post-minimal abstractionists, who were born between 1939 and 1949, is embedded in the Provisional/Casual DNA... There isn’t much that’s casual or provisional about the paintings (one from each artist) on display, even though improvisation is their main modus operandi. Rubinstein’s concern with the object — its history, context and fabrication — clearly registers in the show, which emphasizes the variety of application, surface and support ranging across the works. Attempting to create a panorama of a generation while limiting each artist to a single work is a curatorial challenge that largely succeeds here, with an overall impression of upbeat, robust experimentation. There are no 'strategies of refusal' or 'acts of negation' except to the constraints of formalism."