Painting on Message @ the 2017 Whitney Biennial

Jennifer Samet reviews painting at the The 2017 Whitney Biennial continues at the Whitney Museum of American Art, New York, on view through June 11, 2017.

Samet writes: "This year, the Whitney Biennial includes plenty of painting. And — for the most part — the painting is on message. It’s eccentric figuration with political content. Some of it is seductive, some of it is accomplished, and some is mediocre or worse. As I walked through the galleries, I feared that all levels were being equalized — curatorially and institutionally — under this category of figuration with political content. ... In a couple of cases, the work is transcendent. The two figurative painters who stand out, to my mind, are Henry Taylor and Dana Schutz. Schutz and Taylor stand heads above the rest of the painters in this show because they insist that the formal means of the painting — its entire structure and every visual inflection — serve the content, the message, the expression. This is most palpable in one work by each: Schutz’s “Shame” and Taylor’s “The Times They Ain’t A Changing, Fast Enough!” (both 2017)."

Dana Schutz: Piano in the Rain 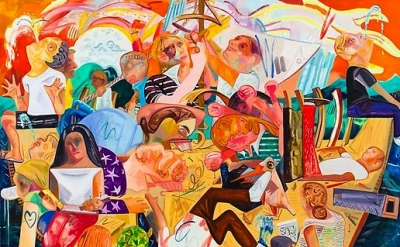 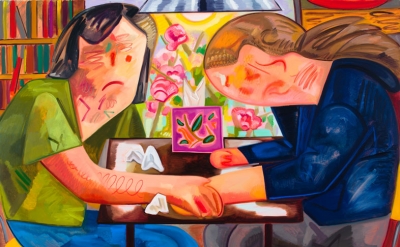