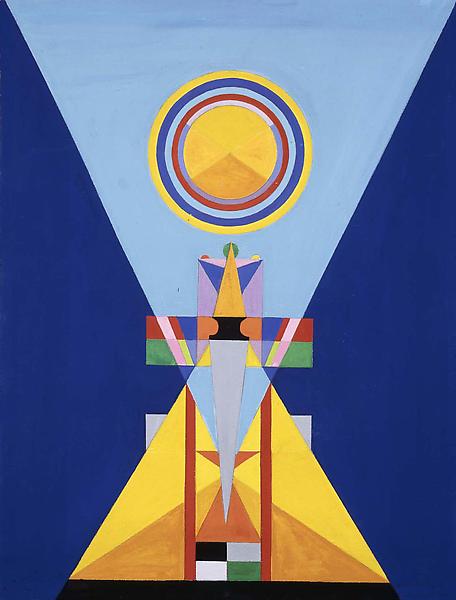 The gallery press release states that through "her role as a journalist that [von Wiegand] met Dutch modernist Piet Mondrian. Their meeting led to a close friendship, and through Mondrian, von Wiegand re-kindled her interest in Theosophy. For eighteen months, she also stopped painting in order to embark on a study of neoplasticism, after which she concluded that Mondrian’s art was not analytical, but intuitive. This insight led to her fascination with the potential of neoplastic theory. After Mondrian’s death in 1944, von Wiegand decided to dedicate her time to painting. She incorporated Mondrian’s iconic grid but jettisoned the constraints of pure neoplasticism and embraced a variety of influences and practices. Her search for spiritual enlightenment led her to Buddhism... Von Wiegand regarded all of her art as spiritual, but the work from these decades is explicitly so. Many compositions incorporate metaphysical images and symbols drawn from Theosophical prismatic color charts, Chinese astrology, tantric yoga, and Buddhism."