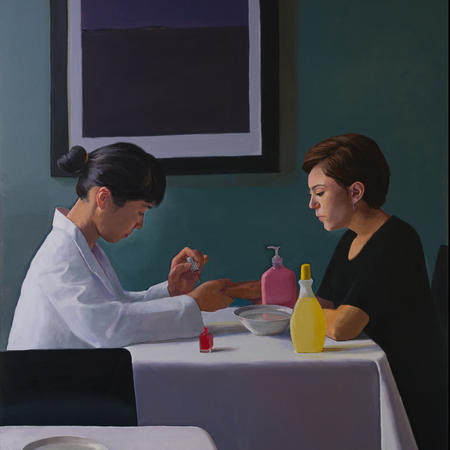 Dan McCleary, The Manicure, 2013 (courtesy of the artist and the USC Fisher Museum)

Knight writes that McCleary's "style is part Piero della Francesca, whose crystalline Renaissance paintings stripped away visual disorder to impose simplified geometries with a timeless aura. And it is part Alex Katz, modern master of billboard-style austerity. In between, McCleary renders simple genre scenes -- ordinary people engaged in common activities. A couple dances. A waitress looks up after refreshing a customer’s cup of coffee. A man, glimpsed through an open bedroom door, weighs himself on a bathroom scale. Another man has his hair washed at a salon... In our image-saturated environment, where pictures daily flood the zone, McCleary endows small acts of everyday perception with hushed reverence."