Larry Poons: The Gravity of a Volcano

Halasz writes: "Entering [the gallery] is like walking into the middle of Niagara Falls, or being confronted by the descending lava of a volcano—all as frozen for eternity by a modernist photographer like Brassaï..." Halasz adds: "And what paint! The whole show is a colorist’s dream come true. The 1980s paintings, with their nubbled surfaces, are shades of purest gray, white or cream, while those from the 1970s explore a fuller range of color—clear and light in some cases, deep and mellow in others. This critic’s favorite is “Loose Change” (1977), a tall narrow painting with blackish blue, light blue, mint green,pink, and rust-colored paint splashed and splattered as well as poured. Much empty canvas is left between its paint marks, creating the impression of a wind-blown rainstorm, or trees in the mist – most evocative of nature."

From the Cocoon: Larry Poons 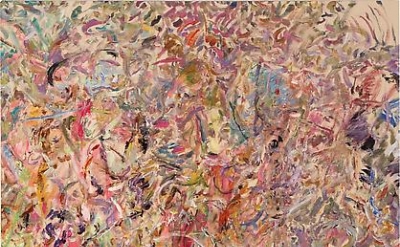 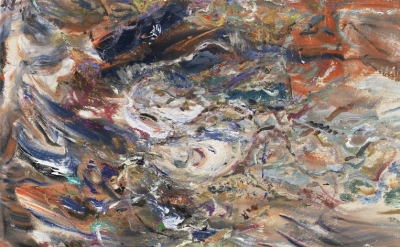