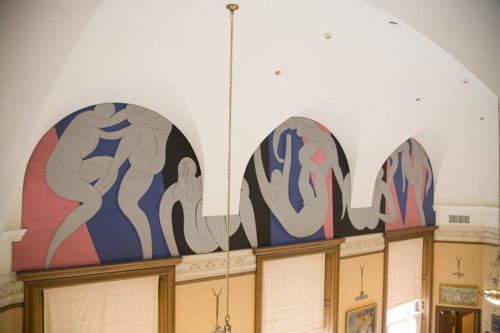 Tyler Green writes about the impending move of Henri Matisse's site-specific painting The Dance to their new building in Philadelphia.

Green cites several sources in depth including Teriade, Dorothy Dudley, and Jack Flam to provide an account of Matisse's thoughts on The Dance and his considerations of how it would be viewed at the original Barnes Foundation building.

Green quotes Matisse from an interview with Dorothy Dudley: "[M]y decoration should not oppress the room, but rather should give more air and space to the pictures to be seen there... I saw that the surface to be decorated was extremely low, formed like a band. Therefore all my art, all my efforts consisted in changing apparently the proportions of this band. I arrived then, through the lines, through the colors, through energetic directions, at giving to the spectator the sensation of flight, of elevation, which makes him forget the actual proportions, much too short to crown the three glass doors - with the idea always of creating the sky for the garden one sees through the doors."