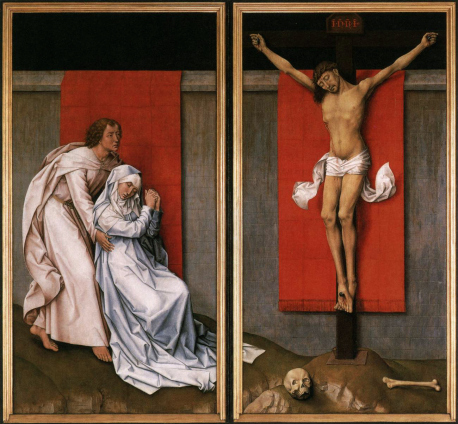 Peter Malone considers the "idea of an eternal return: a circular rather than linear sense of time" in Rogier Van der Weyden's The Crucifixion, with the Virgin and Saint John the Evangelist Mourning (1530) in the collection of the Philadelphia Museum of Art.

Malone writes: "Standing before [the painting], I couldn’t shake the feeling that the two red drapes were meant to be read as the same drape. I don’t mean the artist merely painted the same drape twice. I mean the drapes seemed to mark only one place and only one moment, repeated metaphorically to indicate sympathy between the Virgin and the crucified Christ so extreme that their experience was synchronous in both time and space... the drapes are not just an occasion to introduce a symbolic field of color, but are hanging, suspended elements that echo the simultaneous collapse of the two principal figures. Separate yet identical drapes imply that the Virgin and Jesus are sharing a single moment in a single space, that their suffering is one and the same, even though they are physically discreet figures." 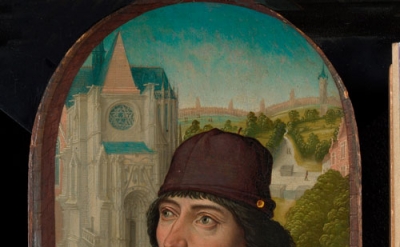