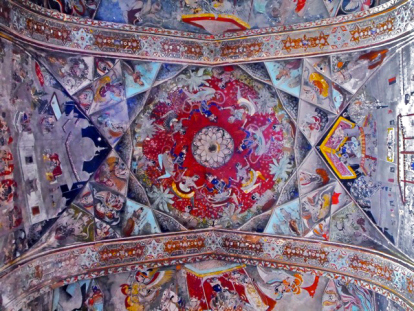 Sharon Horvath writes about the painted ceiling of Badal Mahal in Bundi Palace. Horvath's work will be on view at Lori Bookstein Fine Art, New York from October 09, 2014 - November 8, 2014.

Horvath writes: "I am under an umbrella of sensual geometry, where the round moon marries the rectangle of the room: concentric energy radiates a kaleidoscope of scissoring diamonds and triangular arches. Each kite shape holds an image gem of the story-in-pieces, and they touch each other delicately at their angular tips... Who painted this heaven and when? From what I can gather, they were three painters, around 1605, at play with small brushes, on the brink of an artistic breakthrough, set loose to cover an entire room with pictures despite the fact that they were probably only experienced at making lap-sized paintings. They were from Chunar, from the imperial Mughal court, a gift from Akbar to the rulers of Bundi, in return for their obedience. But this is certain: they were inventing a new form; they improvised the composition; they made manifest the exquisite joy and physical exuberance of humans and other animals together in an imagined space." 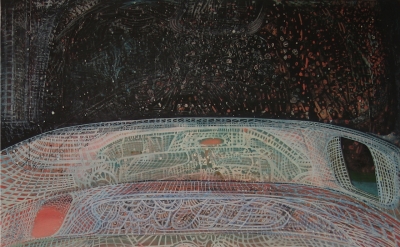