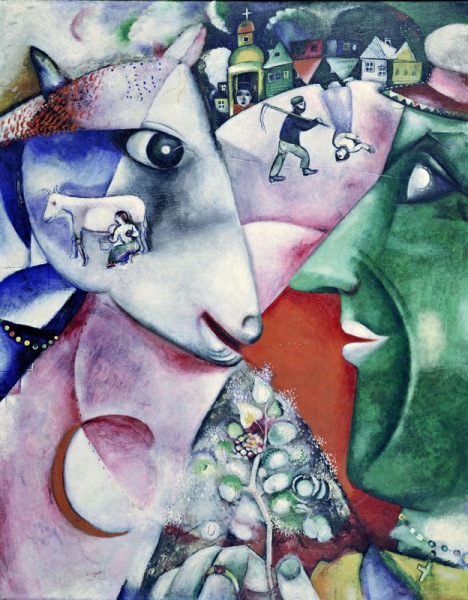 Blog post considering the work of Marc Chagall in relation to his Russian heritage, posted on the occasion of the exhibition Marc Chagall: Modern Master at Tate Liverpool, on view through October 6, 2013.

From the post: "Yet here is a paradox: as the Russian avant-garde consolidates its place in the story of twentieth-century art, Chagall is increasingly marginalised. No modern painter is at once so popular with the public and so disparaged by art historians... The challenge, a century after he mourned that he was ‘only the fifth wheel’, remains to place his early work in Russian context... In I and the Village 1911, fragments of Russian memories – Vitesbk’s domed church and coloured houses, a peasant and a grim reaper wielding a scythe – rotate round a sun-like disk, with a cow’s head forming an arc opposite a green masked face. This was Chagall’s distillation of Russian natural and human life, frozen icon-like in the picture’s glassy surface, but made modern by the revolving forms of Cubism. Emotionally expressive but formally rigorous, it marked how the encounter with Cubism had radicalised Chagall even though he would not relinquish his individual motifs... the key works of his career depend compositionally on Russian abstraction."