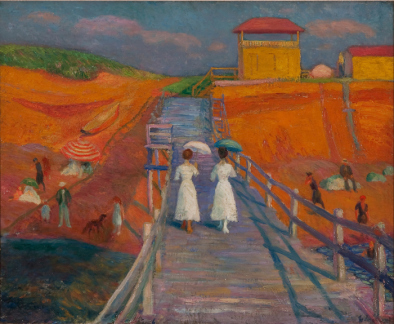 Naves writes that the exhibition "proves, history should also consider [Glackens] an artist of, if not quite the first rank, then closer than might have been expected. Those inclined to fob off Glackens as the maker of pre-Armory Show period pieces or, as is typically the case, a Renoir-wannabe, should prepare to have their preconceptions dusted off, washed up, and hung out to dry. The Barnes exhibition is revelatory. Over the course of almost one hundred pieces, 'William Glackens' confirms what we knew about his skills as draftsman even as it deepens our appreciation of his gifts as paint handler. And then there’s Glackens’s palette! Looking at Cape Cod Pier (1908), with its backdrop of acidic orange, or the rainbow sweep of March Day, Washington Square (1912), we can’t help but succumb to their chromatic grandeur. An out-and-out sensualist, Glackens may have gleaned his painterly tics from Renoir, but he outclassed the Frenchman in terms of chromatic fullness, compositional structure, and, at distinct moments, psychological acuity. Glackens makes his hero seem wan in comparison—an observation reinforced by a subsequent jaunt through the museum’s permanent collection with its many Renoirs." 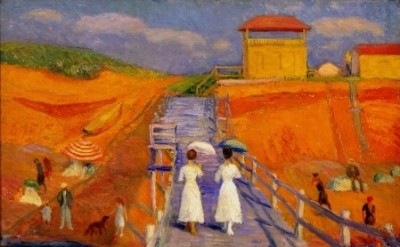