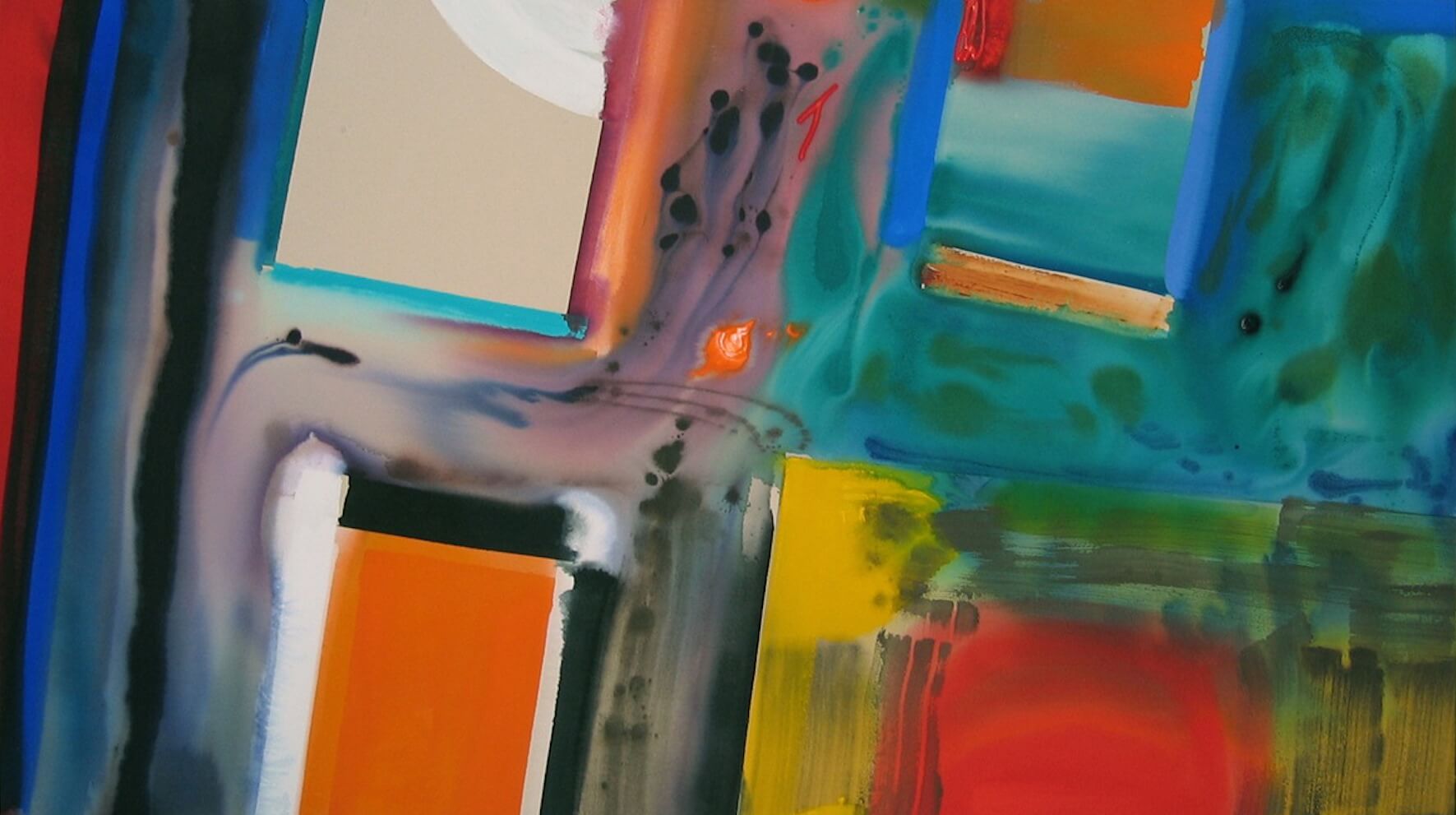 If there’s one thing the 21st century is teaching us, it’s that the act of painting is far more generative than 20th century end-game modernism predicted. This is certainly the case in the paintings of Patrick Jones. Over the course of a long career, Jones has developed a rich visual language and applied his rigorous, abstract process to a wide range of interests from Dogon carvings to political injustice. In his recent work, Jones’ poured and stained canvases have absorbed the space, light, and color of his coastal surroundings.

I recently had the opportunity to correspond with Jones about his career and recent paintings. He has been kind enough to share with Painters’ Table his thoughts on painting and images of his work in advance of a retrospective exhibition, Celebrating Abstraction, which will be on view June 7 - 14, 2012 at the Appledore Festival. What follows is a reflection on Jones’ work punctuated by Jones’ own observations.

Patrick Jones, Mindscape, 2012, acrylic and yacht varnish on canvas (courtesy of the artist)

Now 64, Patrick Jones began his career studying at the Birmingham College of Art. In the 1970s he travelled to the United States where he earned an MFA at the Maryland Institute. Introduced by sculptor Tony Caro to the critic Clement Greenberg, Jones was selected by Greenberg for the Triangle Workshop in 1982. Jones, who returned to England in 1994, noted the lasting effect his time in the U.S. had on his work: [Greenberg] chose me for Triangle New York, where I met Helen Frankenthaler and Larry Poons. I had already met Olitski in Carolina in the 70s. Meeting the people involved spending hours in the studios, cropping and evaluating. I was most influenced practically, however, by a Canadian painter, Terry Keller, who was painting all/over grey paintings. The division-less canvas was a revelation to me.

I was broke, living in Long Island City and working as a marble floor layer for a Sicilian family. On my days off I’d walk from Grand Central to the Met, Frick, Guggenheim etc. I met the Caros (Tony and Sheila) who I knew from London. They took me to the opening of Dogon carving at the Rockefeller Wing. One sculpture, Twin Couple from the Lester Wunderman collection completely changed my view of art. Before that I had been a formalist... This was of a different dimension entirely, and like the Easter Island Totems, spoke of World Art and specifically the art of other cultures. I had already been interested in totems from David Smith, who I regard as a huge influence. Around the same time there was a Braque Retro at the Met, which also blew me away. As a consequence, I stopped painting on canvas and started to make reliefs out of construction materials. They were eccentric shaped canvases made out of doors and still wall based, but breaking out of the rectangle... Everything about Braque was the antithesis of good painting, which was loose-limbed, open and daring. His paintings were stuffy, like being in a cupboard, endlessly repainted like a blind man fondling a large pebble. But they seemed a way into personal reflection.

Personal reflection is a hallmark of Jones’ work. Through the daily practice of painting he is able to relate quotidien activity with wider concerns about the world. Concerned with political injustice and civil rights, Jones painted his recent No Parasan paintings, which combined the process of color-field abstraction with anti-fascist flags. Jones notes:

The phrase is derived from the spanish civil war and means 'they shall not pass.' As an abstract painter I, of course, realise there is no narrative plot, no stories to be told.

It is the reflective nature of painting, however, that defines its relevance in the age of digital photojournalism. While the deluge of instant images no longer possesses the power to shock, the slowness of painting enables Jones to ruminate on what he has witnessed.

I must have painted many thousands of large canvases. Yet I only have a dozen or so to show at any one time. I’m 64 now, have painted seriously since I was 21... In my studio is a huge red, black, and white monstrosity, all over the place, but I felt good doing it, that something is cooking... I’m hooked on what I don’t know and need to learn from Painting.

I don’t want to know what I’m doing too well. I love seeing what comes out of me when I least expect it. To that extent I work into unprimed heavy-weight cotton duck, which I damp slightly and then free/form improvise. I use a variety of different acrylic paints, which allows drying over night, so I can evaluate the next day. Evaluating is problematic and I have often reworked what I should have left alone. That’s my bug bear.

Describing his studio practice, Jones stirs thoughts of Flaubert who purported to write hundreds of pages of prose to achieve the perfect sentence. Jones’ unique attentiveness to, and immersion in, the search of painting has been noted by others. In 2007, painter Sanford Wurmfeld wrote that Jones “looks afresh for ideas - ideas that are pure color and form... For him it is a visual language from which arises pictorial events to be savored.”

This close attention to what is happening inside the painting and how each action and its resulting mark relates to those that preceded it is the cornerstone of Jones’ work. A distinctly external awareness is palpable as well. Although firmly rooted in color-field abstraction, Jones’ paintings consistently register as 'pictures' - their spatial organization hints at a window space of varying depths even while the physicality of the paint asserts the surface. The space, color, and form inside the painting seem to subtly accept cues from outside the painting. These cues, in concert with an exploration of the physical experience of the paint, create an invisible yet highly animating tension. In this sense, Jones’ paintings function like memory or after-image. I asked Jones to comment on the role of external cues, landscape or figurative, in his work:

[Expression] is more important to me than whether or not I use the visible world. I feel that [the tendency to incorporate the visible world] is to do with an accident of birth. I lived as a child in the most idyllic surroundings of sea, beach, boats, and weather and have always been drawn back. Today I spent an hour studying the grey horizon line and the tonal variations along it as the squalls past. It’s about looking.

I now live right by the sea and am really attached to the visible world just like every painter would be, particularly Turner. A rough sea and broad rainbow yesterday definitely went into my subconscious image-box. The after-image idea would fit with Surrealist automatism, a process I appropriated from Pollock, of letting the images come through in the work [and occasionally veiling them]. In Jones’ paintings, actions - staining and pouring - become objects. Gestures and pools of color attain a sense of the 'aura' of objects, a palpable, singular identity. In this way Jones has assumed the mantle of Pollock’s late paintings such as Portrait and a Dream and The Deep, mining the unconscious shared meaning between gesture and image.

I am by nature a struggler. I have a vision, try and paint it and get stuck, so it becomes pretty quickly a battle for survival: The Painting or me. This doesn’t happen with one shot pictures but [rather] when I use the activity of painting to reveal the vision, or the plastic realisation of it. The paintings seem to have to be born in some way when my interference is secondary or relegated... I feel this is more than happy accident, it’s connecting with something. I have occasionally felt in a state of grace when things are going well, where the paintings are flowing thru me. I’m just the conduit.

Patrick Jones exhibits at Poussin Gallery, London. He has had solo exhibitions at the Serpentine Gallery (1978), Nicola Jacobs Gallery, London (1981), ICA, London (1982), and Hunter College, New York, (1983). A retrospective of Jones’ paintings, Celebrating Abstraction, will be on view June 7 - 14th at the Appledore Festival with works by ceramicist Sandy Brown. A discussion on Abstract Painting and the Visible World with Mel Gooding, John Daly, and Sam Cornish will accompany the exhibition. 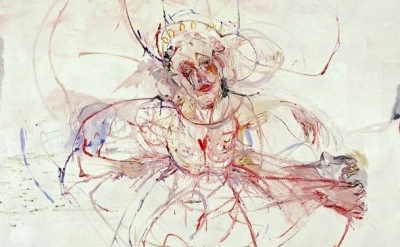