Submitted by Brett Baker on November 21, 2012.
Click photos to enlarge:

From Rome to Atlantic City, an exhibition of paintings by Margaret McCann, is currently on view at the University of Virginia’s Ruffin Gallery, through December 7. In works rich in both allusion and painterly craft, McCann merges careful observation, popular culture, and an encyclopedic knowledge of the tradition of painting. To view McCann's paintings is to understand that popular culture has long been a part of the language of painting. Each of McCann's works is an enigmatic parable inside a dynamic formal structure that is animated by a personal sense of touch and color.

McCann recently agreed to discuss her work with Painters' Table.

PT: I think we have to start by acknowledging that your Atlantic City series has an unanticipated additional reading after Hurricane Sandy. What We Worry? (2009) depicts the sea looming over a spiraling Piranesi-esque Atlantic City boardwalk. Lookout (2008) depicts the boardwalk being inundated by the sea. How do you feel about this unexpected, yet unavoidable new reading?

MM: During Irene “What We Worry?” and “Lookout” were in my show “Boardwalkers” at the Atlantic City Art Center on the Garden Pier, the front of which was washed away in a previous hurricane – you can still see the broken piers. When the nearby Revel was built, huge amounts of sand were added to the beach so the pier is now ‘sand-locked,’ but it used to extend over the water, so I had to temporarily remove all my work during the storm. On a barrier island the weather and water encircle you and the possibility of high water feels ever-present.

Their meaning is probably more journalistic than metaphysical now. At least I painted them before the tragedy (I’d be too self-conscious now), and the synchronicity supports painting’s power and reach - the kind that draws non-artists to painting. But floods are archetypal events, as Guston’s versions express. I was struck by how much my painting “Water Country” resembles the roller coaster washed offshore in Seaside Heights. PT: Many artists use elements of pop culture in their work, particularly installation artists - Mike Kelley comes to mind for instance. Painting objects, however, is far different from assembling or gathering them. In your work, characters like Alfred E. Neumann, Marge Simpson, the Monopoly man, and various other characters are all attentively, even lovingly, observed. Does subjecting these ephemeral cultural icons to the scrutiny of painting alter your perception of them?

MM: Painting inane objects earnestly mostly comes from a love of artful paradox. Maybe it’s passive-aggressive, too – but nicer in art than in life. Doing so also resonates with Freud’s analysis of humor, as involving exerting more effort to accomplish something than is required – a kind of comedy of physics. Absurdity’s contrasts and subtleties are something the meditative nature of painting can exploit.

I also approach these objects with nostalgia – not just for childhood, but for America. Living in a foreign country for a long time (I was abroad 8 years) makes you very homesick for your culture, warts and all. I see these characters as an American ‘commedia dell’arte’ troupe – especially in Atlantic City, a year-round carnival on the stage-set of the boardwalk, and a caricature of American culture. The confrontation of zany casino facades and the disinterested ocean is pretty funny, but it also feels like the edge of the world.

PT: Varied, vivid blues dominate many of your paintings. The color blue seems like a complex character in and of itself. In the 20th century, blue acquired obvious melancholic connotations, but art historically it’s also an expensive pigment, one used sparingly and to confer pictorial significance. The blues in your paintings feel both electric and timeless; you have made blue yours, in the way that Guston made cadmium red medium his color. How did blue enter your work in such an emphatic way? Margaret McCann, Call Me Marge, 2005 (courtesy of the artist)

MM: Blue has always been my favorite color but I didn’t start fixating on it until I painted “Call Me Marge,” a self-portrait as Marge Simpson from 2004. I was stressed out and decided to throw caution to the wind, and worked mostly out of my head for a few years, playing around with color.

In Italy I’d been taken with the many Caravaggios in Rome, especially regarding his handling of cloth, and I studied the subtle color of Sienese painting, Piero, Bellini, Morandi, etc. I also started teaching painting, and was approaching that according to how I wish I’d learned it. So I studied saturated vs. dull color harmonies, and temperature contrasts. When I returned to the US I was struck by the prevalence of colorful plastic, even in architectural forms – so different in feeling from Roman monuments. A lot of art I liked looking at, like that of Christian Schumann, Hillary Harkness, had more synthetic coloration.

Living in Portsmouth NH inspired watery scenes like “Memorial Bridge” – and I began using a beautiful piece of blue-green satin I brought back from Italy in still lifes like “Over the Edge” (1999) to conjure up water. When I moved to Atlantic City water was everywhere, so I’ve painted that cloth a lot. I like the way cloth functions between form and space.

PT: Prisoners are often characters in your recent paintings. Clad in striped convict suits, they are either goofing off or chained to their easels. In their “captivity,” however, they engage in joyful, free activities - cartwheels and flips as well as reading, writing, and exuberant painting. You’ve mentioned the convicts are surrogate self portraits. Is being a happy captive part of the inherent reality of being a painter?

MM: Absolutely – I have pretty severe painter’s guilt, always feeling I should be painting no matter what else I’m doing. So little time, so many paintings to paint!

PT: After graduate school you went to Rome on a Fulbright to study the depiction of saints. Saints would have been extremely familiar characters at the time they were painted, their stories known to the entire audience. Looking at your paintings I can’t help but think that today’s “saints” come from television and the internet. Sponge Bob and Marge Simpson are instantly recognizable to the largest audience today and therefore possess a powerful potential to communicate.

MM: I noticed I found things funny that Italians didn’t – like paintings of St. Lucy holding a dish with her eyeballs on them, or the oddness of gory Late Mannerist martyr paintings in churches, or Constantine’s giant foot on the Campidolgio. Not that Italians lack humor – their comedy is tremendous - but Italy is so burdened with its history that the way to get out from under it is mainly in opposition to it, satirically. I became very aware of how buoyant American culture is by comparison, not moored to anything too deep, and that contrast of gravity and levity began to enter my work.

Our best cultural archetypes – Sponge Bob, Rat Fink, Alfred E. Neumann – play the fool effectively, but not Uncle Money Bags, who is both a hero and a villain. Insofar as they travel abroad (especially The Simpsons, one of America’s finest products, broadcast in many languages, including Arabic), they serve as a kind of ‘international apology tour’ – but also assert American open-ness and imagination.

PT: You have cited Brueghel as an important artist for you. Can you elaborate a bit on your interest in Brueghel’s work? What other artists are on your mind lately? MM: When I was little I used to draw houses as faces, so I guess I have the same surreal gene. I love the way Brueghel’s bird’s-eye view of humanity conveys weight and whimsy, as in “Mad Meg” or “The Triumph of Death” – and as Auden’s poem about his Icarus painting illuminates. His “Tower of Babel” paintings, based on the Roman colosseo, are about as sublime as painting can get. I used to take my drawing students to the colosseo every semester; one day a man stood at its outer edge, threatening to jump off because he’d lost his rent-controlled housing. The firemen talked him down, but the next class he was back, and was talked down again. There was something very Sisyphusian about the scenario.In my ‘giant’ series I’m trying to express something about the sublime as a thwarted conceit. Painting the figure, Lucian Freud is formally my biggest influence – the way he handles light, form, and texture. There are so many strong painters now, always great shows to see.

PT: Your paintings are replete with subtle and explicit art historical and contemporary references and quotations, closely observed subject matter, complex spatial arrangements, visual and verbal double entendres, and a personal sense of color, not to mention humor, melancholy, pathos, and imagination. In other words, your work presents a very convincing argument for exploring the full range of expression available in painting in each and every work - that more is indeed more in painting. Would you agree with that last statement?

MM: I love complexity in art. I made lots of collages in college, and I’m interested in making my paintings more collage-like, reconciling mimesis with playful invention. For me, the process of painting involves setting up a problem, and solving it circuitously, with plenty of ‘visions and revisions’ – like a mini-journey. In Italy I went through a ‘less is more’ compositional phase, but eventually realized my sensibility is basically baroque. Maybe because I’m one of ten children, cubism feels normal to me, and I’ve never found creating conventional space compelling, however much I enjoy it in other people’s paintings. I prefer the way foreshortening conveys deep space as its shapes contrarily adhere to the picture plane.

The ideological fights between figuration and abstraction (or whatever) I had to suffer through in grad school were so boring. Skill is now no longer uncool, and painters can be interested in all art. I have always had eclectic taste, and thankfully postmodernism lets us regard art history less puritanically, and relish it like a smorgasbord - painting can be an arena for that. 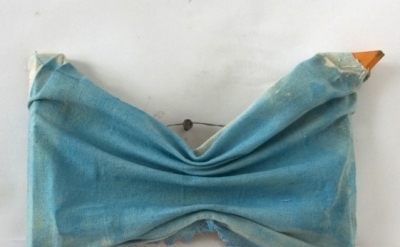 The Edge and a Little Beyond 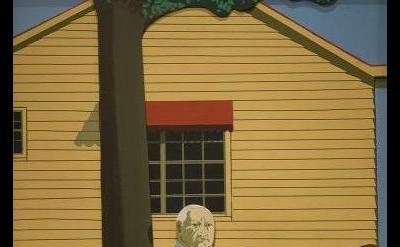