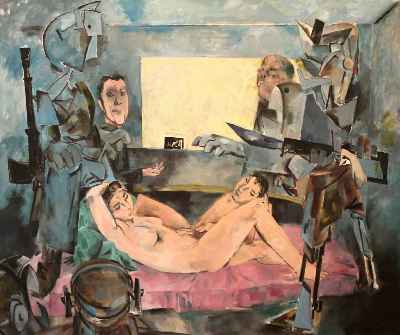 James writes: "I knew of him as a socialist-expressionist figurative painter and draughtsman with first-hand connections to the Ecole de Paris and various Modernist figures... From the ‘80s onwards he had been mostly drawing. His earlier paintings on canvas had always been very graphic, like his major piece The Bombing of Sakiet (1959), a big canvas indicting French actions during the Algerian war of independence... The jagged, narrative charcoals Peter came to concentrate on were – and are – widely admired for their poignancy and expressive energy. They sometimes have mythological motifs, sometimes historical ones. I recall him in his studio bringing out one sheet with a tremulous tenderness that evidently reflected his feeling for the subject itself – the death in prison camp of Robert Desnos. At other times his drawings are more poetically unspecific – an old man with a flower, a woman with a bird."