Through the lens of several west coast exhibitions, David DiMichele notes the continued relevance of abstract painting and argues that Jackson Pollock's Mural (1943), recently on view at the Getty Museum, should "serve as a benchmark with which to evaluate current work."

DiMichele notes: "Surprisingly, one of 2014’s most impressive historical abstract painting exhibitions was at the Getty Center. After two years of restoration, Jackson Pollock’s Mural from 1943 was unveiled, along with an exhibit documenting the conservator’s efforts. The painting looked stunning; I could easily say that it was the most powerful abstract painting I have seen in years, the most visually inventive and compelling one. It was reportedly inspired by Pollock’s witnessing of a mustang stampede during his teenage years in the west, but many historians see it as a group of abstracted, attenuated stick figures that appear and disappear amongst the meaty brushstrokes that form a pulsating field across the canvas. What is it that makes the work so much stronger than most current abstract painting? For one thing, it retains a reference to the world." 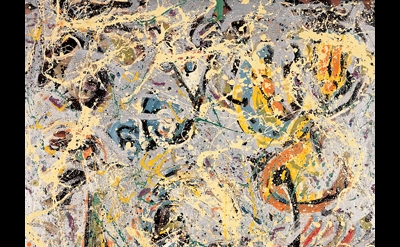 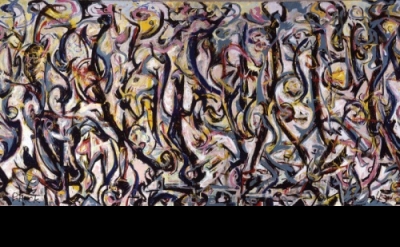