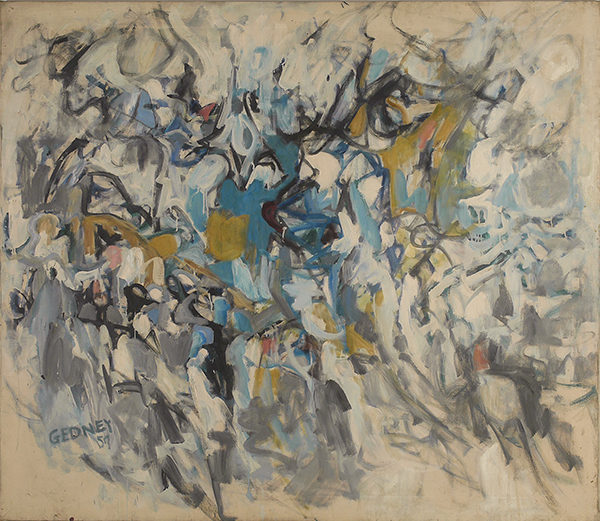 Cassin writes that the show "generously covers more than a decade of the early years of Gedney’s oeuvre, a period during which her work fluctuated between the two initially conflicting directions endlessly debated at Phillip Pavia’s Club, described by him as “the abstractionists’ presence and the purists’ lack of presence.” This translates in to two groups of works: the geometric and meditative paintings versus the emotional, gestural works... As much as her pictorial repertoire is still in the lineage of the masters she was close to at the time—Kline, De Kooning, Pollock—Gedney generates a language and palette of her own. Her bold and idiosyncratic use of unusual greens and strong primary colors against the cream backgrounds becomes her signature world of images, a laboratory of individual alchemy. Although the stated subject in her paintings and drawings during this period is pictorial space, the works belong to the realm of pure emotion, linking her further to Franz Kline’s credo: 'I paint not the things I see but the feelings they arouse in me.'"