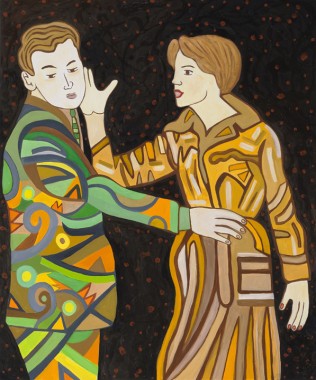 Bradley Rubenstein interviews painter Susan Bee about her life, her career, and her recent work.

Asked about her newest work (which will be on view at Accola Griefen Gallery, New York from May 23 to June 29, 2013) Bee comments: "I have become very taken by the idea of theatricality and artifice. I am creating these paintings as spaces for a drama to take place. The figures are actors and actresses in a stage that I am setting up for them to play out their roles. The film stills I'm referencing are very dramatic. There is a subtle undertone that is pulling you in and pushing you out. I remain intrigued by the dangerous women and the desolate men in the film noirs. These paintings have brought into focus the power of the individual faces and bodies and their relationship to the painted ground -- and also their relation to each other. I'm now emphasizing the dynamic between the figures, whether they're pressing against a windowpane or pressing up against each other. In fact, the paintings' focus is on these relationships and the psychological space and emotions that are carved out among the persons that I'm portraying." 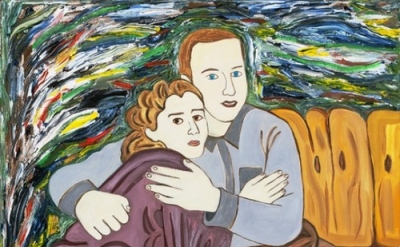