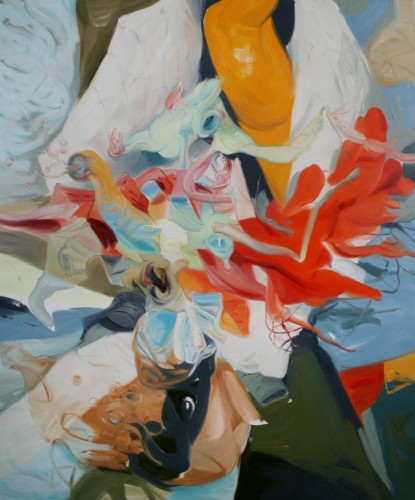 Zachary Keeting and Christopher Joy talk to painter Darina Karpov at her exhibition Sudden Leap Into the Interior at Pierogi, Brooklyn, on view through March 17, 2013.

In a 2011 interview with Andrew Frank for BOMB, Karpov noted: " It’s very appropriate to see my work through the temporal lens and to think of it in terms of duration, as it unfolds over time whether through the build up of layers or through movement across the pictorial plane. I’ve always been influenced by time-based media—film, music, or theater—all the things that evolve and expand spatially and in temporal dimensions. I think kinesthetically, or maybe it’s the thought itself that’s actually kinesthetic and I am just trying to plot it or record its movement. The experience of dislocation and perpetual movement is fundamental in my work. I like to imagine how space is being affected by time, how new hybrid structures result from layers of paint bleeding through numerous translucent applications, or through other improvisational methods. It can produce a feeling of transience and transform the passage of time into space. The figure-ground relationships become really dynamic, nonhierarchical, and fluid. All sorts of liberating possibilities can open up like transcending the limitations of planar space and gravity, for example, or forming interfaces between different surfaces so one environment may easily slip or fold into another and structures may cluster or scatter. It helps me to think of the space as a kind of positive substance, active, vibrating, and malleable."