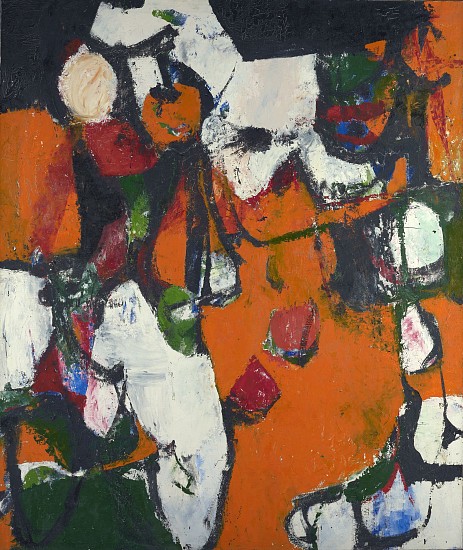 Riley writes: "Jubilee (1955), [is] the most muscular, tactile work in the Berry Campbell show. The dominant color is the orange of an established wood fire, which spreads from edge to edge out of a funnel form at the bottom of the canvas. The orange is spread thickly over undertones from umber to green, bounded by ragged edges of black that loop and rebound, as they do in many of Park’s black and white paintings of the period. Charlotte Park's use of the matte black shows an avowed debt to Goya, and it takes nothing away from the brio of her work to note that it weighs in alongside similar implementations by Kline, de Kooning, Fritz Bultman and even her husband, James Brooks. The black here also reminded me of the way Georges Rouault bounded the deep tonal areas of his paintings in a black line that is like the leading of a stained glass window."