O'Brien writes: "The neon colors of the 98 foot mural immediately jump out and clash against the surrounding stoic tones, while the gridded donut enclosure acts as an update the stagnant flat grid of Late Modern architecture.... The Curtain certainly takes cues from early 20th century murals, but instead of opting for a figurative approach, this collaboration tells an abundantly abstract story of the reciprocating influence that painting and architecture have had upon one another, as well as point toward a vivid future where both disciplines can merge into one grand gesture." 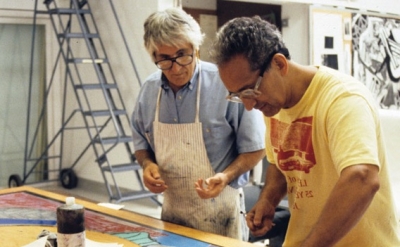