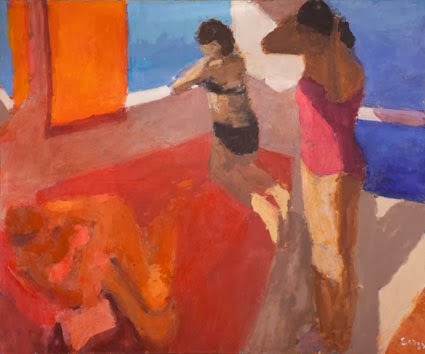 Ilaria Rosselli Del Turco reviews a book on Sargy Mann, a painter who has continued to make perceptual-based work even as his eyesight has deteriorated. A short film trailer about Mann and information on both ebook and print copies are available via the book's kickstarter page.

Del Turco writes that the book is a "go-back-to text, a real insight in the life of a painter, where Mann explains about the search for his motif, how he proceeds from it to conceiving a work, the difficulties in realising his ideas and finally the completion of the painting. Spacial tension, rhythms, the language of light, are all taken into consideration as he traces the process of painting."

As Tim Adams wrote in 2010, "the change in his sight [Mann] greeted with artistic curiosity: 'my world had become greyer and hotter,' he recalls. 'I was a human spectroscope such that I could see that a sodium streetlamp was monochrome because it only had an orange halo whereas a car tail light of the same colour had a spectral halo…' He'd read about Monet's cataract operations before he had his own and what he was most interested to discover was whether he had colourless cataracts or the yellowy-brown ones that had progressively informed the changing palette of the Impressionist at Giverny. Would he, like Monet, see the world saturated in blue again after the operation? To his joy he did, and his painting for a while reflected this new cobalt dazzle."