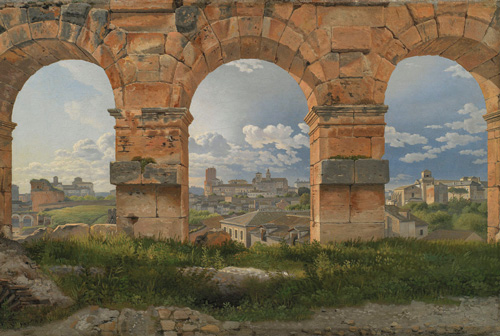 Barnes writes: "A portrait drawing by Ingres can engage us more than some of his grandest historical works. More widely, there is a slippage in the hierarchy of genre. And so with Eckersberg: currently, his best-known painting is not one of his historical pictures, but rather a contemporary view of a place where some of that history unfolded. It is an urbanscape of the Roman skyline seen through three arches of the Colosseum; modestly sized (indeed, many of his Roman pictures are smaller than you might expect), yet solidly, carefully structured. However, it is that very structure which makes for its novelty. Whereas some old Roman remnant, like an aqueduct, might traditionally function in a picture as a mid-distance eye-catcher, here the masonry is deliberately in our faces, blocking as much as enhancing the view. Indeed, it is the view: we are being told to examine these blocks of stone, seen not in full sun but rather in warm shadow; to inspect this ancient form of construction, these sturdy pillars with modest decoration, these trusty keystones, and to reflect on time’s fretful depredations, its chippings and stainings and discolorations."