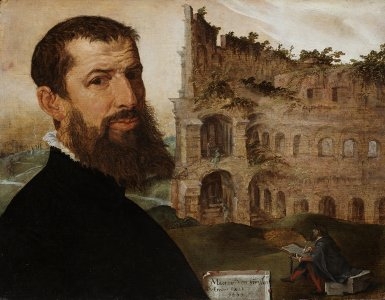 Einspruch writes that the exhibition focuses on van Heemskerck's "grand tour" of Rome where he "he developed a lifelong fascination with the Colosseum, which in his time had a grove sprouting from its top echelon. He also drew from the Sistine Ceiling. Michelangelo captivated him just as Greek sculpture captivated Michelangelo." Einspruch also notes that a van Heemskerck self-portrait in front of one of his paintings of the colosseum "may be the first time that someone has commemorated a tour by recording their portrait in front of a famous destination. Given all the tourists that have ever had their picture snapped in front of a landmark, this painting arguably contains the most influential pictorial innovation of all time, measured quantitatively."

Caravaggio & His Followers in Rome