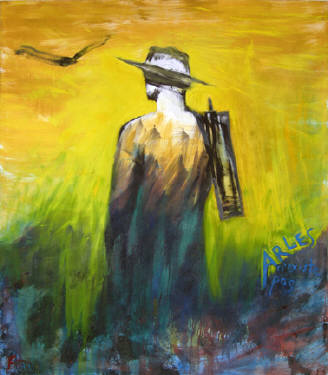 Ferlinghetti recalls: "the Six Gallery was associated with the Beats, not with the painters in the Bay Area Figurative group like Diebenkorn, Elmer Bischoff and David Parks. There was quite a divide there... there was no communication between these two groups. I mean, there was a revolution in poetry going on in one end of North Beach, and a revolution in painting going on at the other end near the Art Institute, and there was no communication between the two."

On his painting career he comments: "I have a hard time being recognized as a painter, and not just a poet who also paints. It’s really a drag to get that all the time, because I was painting before I ever had any poetry published at all, or anything published, as far as writing goes. I was painting in Paris when I wasn’t writing. I was just too busy to promote myself as a painter. I didn’t hang out with any of those San Francisco painters. They didn’t know me, and I didn’t know them. The only one of the figurative group that seemed at all interested in the poets was James Weeks. I used to have coffee with him once in a while in North Beach."