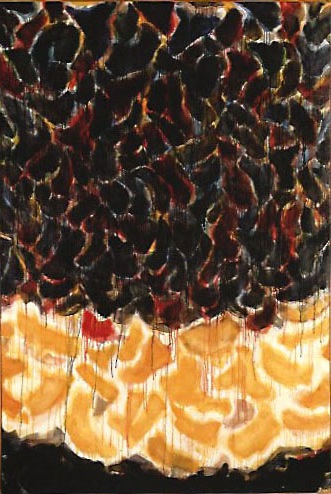 Roth writes that "this exhibit makes clear, some of the strongest influences on Francis’ approach to painting were his own near-death experiences. They arrived at regular intervals. The first came after a WWII air training exercise, when it was discovered, following a crash, that he had spinal tuberculosis... In his first mature works, you can see precisely how his early experiences – flight, the study of medicine and botany and watching the play of light from his hospital bed – informed his painting. Light, in particular, seems to be the subject of a suite of early works that open the show... Notable among them are several untitled works from 1957-59 that make direct reference to the body, in particular, to the spine. They feature bold-colored shapes, splayed and lightly spattered – key components of what would later be dubbed post-painterly abstraction, a term applied by Clement Greenberg to a diverse group of artists who leaned toward open compositions made of washes and areas of poured color." 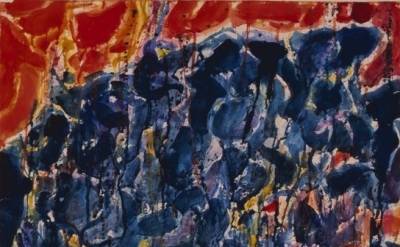