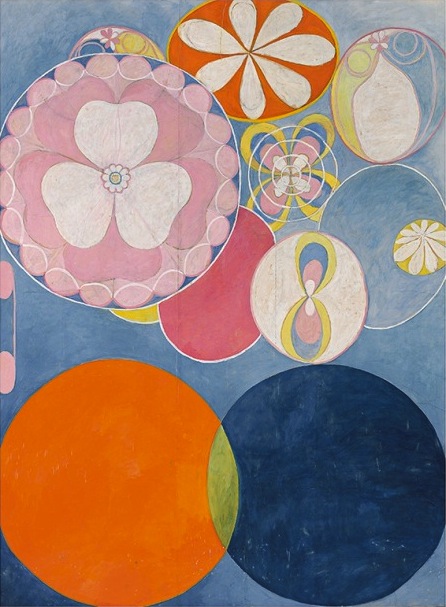 Voss writes: "When Wassily Kandinsky wrote to his New York gallerist Jerome Neumann in December 1935, he was clearly anxious to reassure him once again that he had painted his first abstract picture in 1911... To be acknowledged as having produced the first abstract painting had become a highly coveted prize. Which modern artist could claim that prize was still being fought over. The other leading candidates were František Kupka, Robert Delaunay, Piet Mondrian and Kazimir Malevich. What Kandinsky did not know is that a Swedish painter by the name of Hilma af Klint had created her first abstract painting in her Stockholm studio in 1906, five years before him. What’s more, she had taken the same path towards abstraction. Without knowing of each other’s existence, the two artists seem to have travelled for a long way like two trains on the same tracks. Klint arrived before Kandinsky."