Submitted by Margaret McCann on December 9, 2018.
Click photos to enlarge:

Noah Buchanan: Myth and Melancholia was on view at Dacia Gallery, New York from November 5 - 25, 2018.

Unburdened by the Cold War schism between abstraction and figuration, younger painters like Noah Buchanan shamelessly flaunt skill. Nostalgia for past mastery was returned to the art world under cloak of postmodern cynicism by painters like Lucian Freud and John Currin. It is now just one style among many seeking audience around the world, critics no longer the principle taste-makers nor galleries the portals they were before the internet.

In his formidable “Triumph of Bacchus” Buchanan appropriates Velázquez, whose earthy god carouses with ordinary drunkards and pokes fun at the ceremony of coronation. Velázquez’s tonal drama and casual groupings, which would influence Manet, were impacted by Caravaggio, whose robust tenebrism advanced from Leonardo’s concrete application of chiaroscuro. Working for the Duke of Milan, Leonardo’s figures, fortified by anatomical innovation, helped shaped the Lombard Realism Caravaggio was trained in. 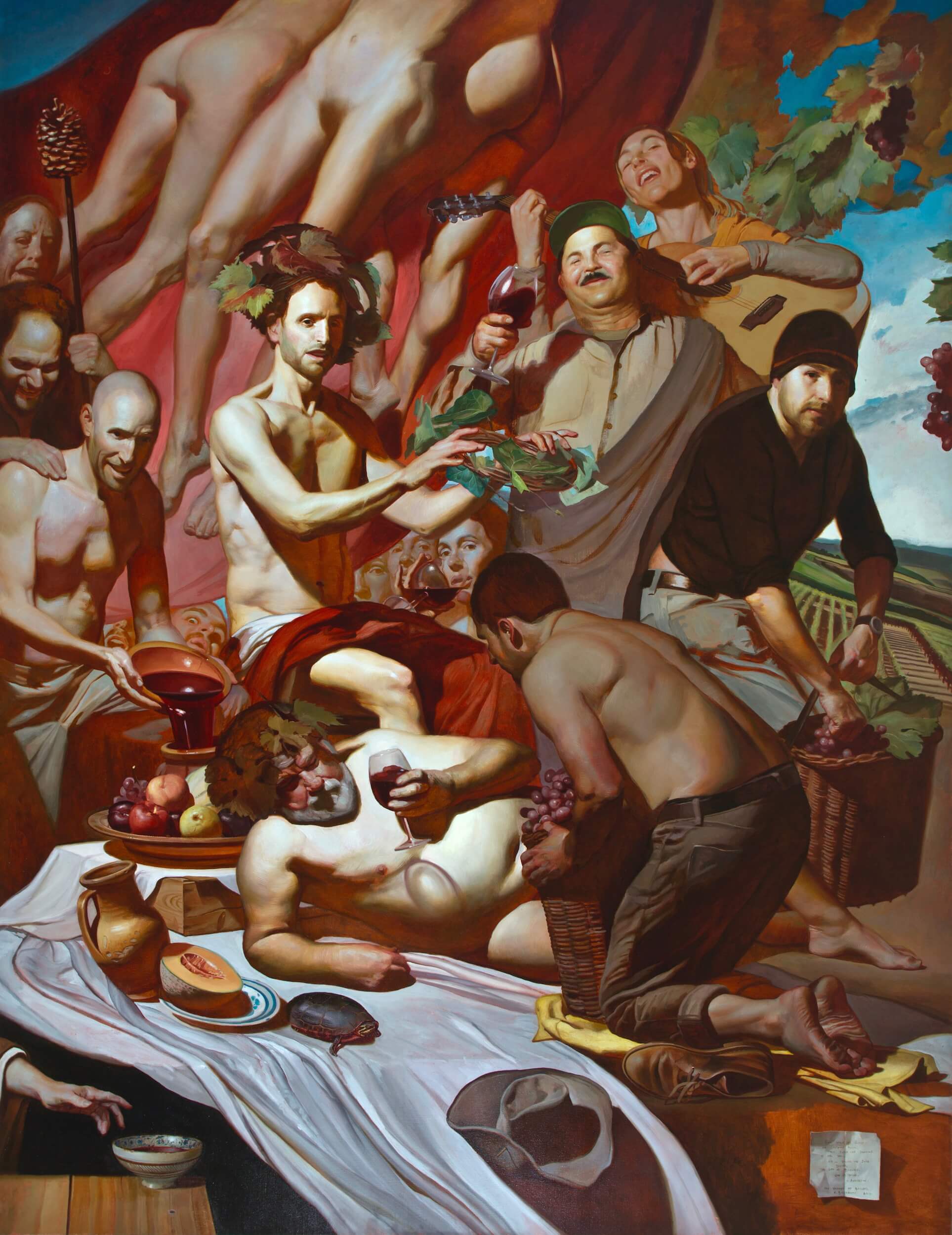 Buchanan models as several men — pouring wine, gathering grapes, kneeling before the god — a well-oiled Silenus somehow reclining in the truncated space between them — and as the god himself, offering relief from the daily grind. One can assume the artist enjoys wine, but a metaphor for his labor suggests itself: In “The Birth of Tragedy” Nietzsche describes the Apollonian and Dionysian (aka Bacchanalian) tensions of the human condition, praising the artfulness of Greek tragedy for encompassing both. Yet despite swerving baroque complexity, Buchanan’s solid clarity maintains Apollonian neo-classicism. 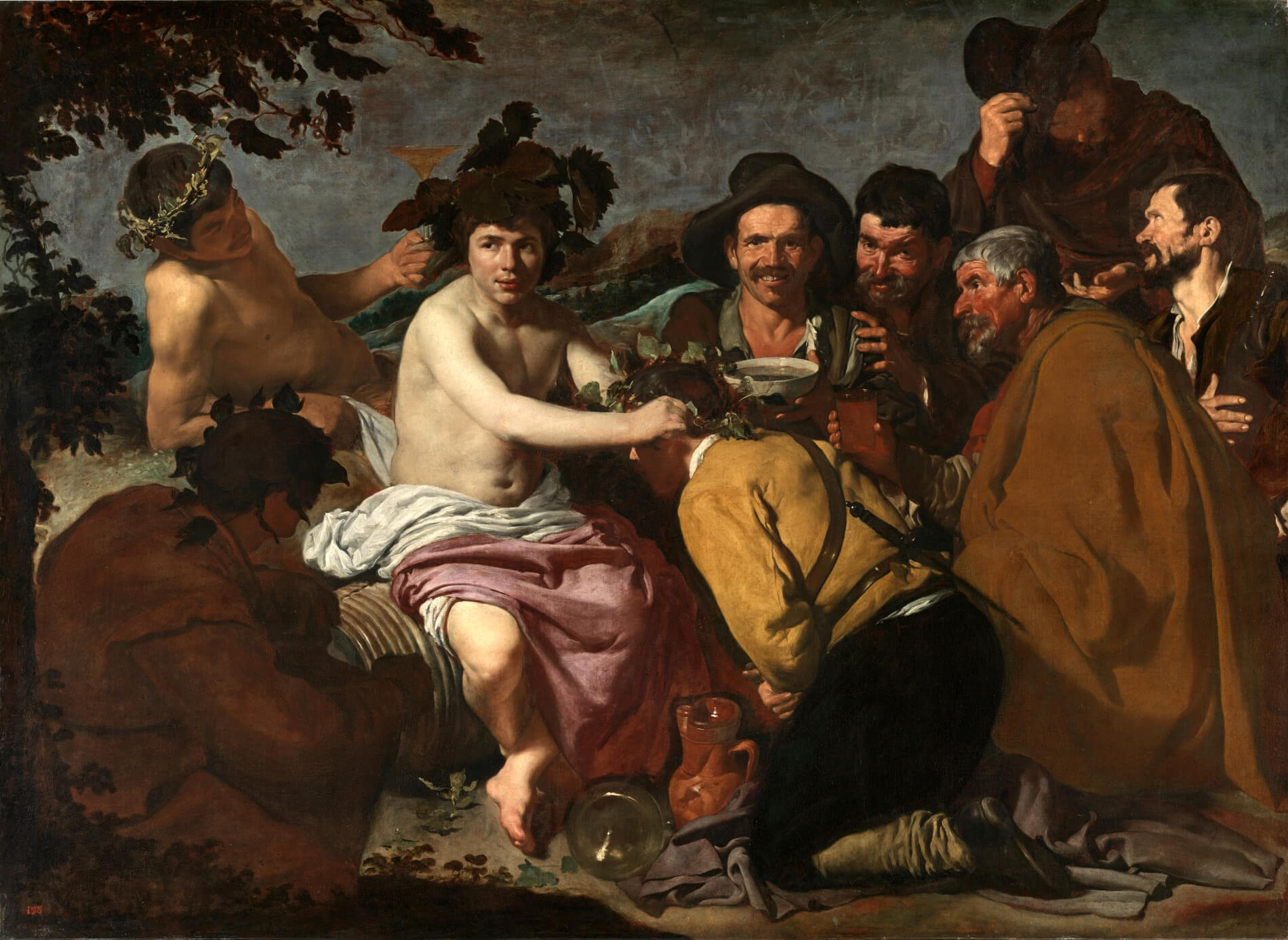 Buchanan’s tonality aspires to psychological drama — “[L]ight within a painting represents the higher self… The shadow is equally compelling… the Jungian shadow-self…,” and even metaphysics: “In the work of my heroes, the shadow is dark, transparent, lacking information and color; a void.” Rudolph Wittkower considered Caravaggio’s shadows as absence of light, voids, while Titian’s suggest eventual illumination. Caravaggio’s darks play existential intensity off the artifice of theatricality (though his pre-photographic realism would have had uncanny presence in shifting, pre-electric light). Buchanan’s shadows instead feel promising, as warm under-painting provokes temperature contrasts in pleasing color harmonies. They elude as well the emotional darkness, “duende,” of Spanish painters Velázquez, Ribera, and Zurbarán.

Buchanan’s shadows do assist his goal of “depicting the human figure as an anatomical event”. In the footsteps of Caravaggio, who Robert Hughes deemed “master of the gesture” — and Michelangelo, whose joining of expression to vigorous anatomy, echoing classical art, inspired the Mannerist and Baroque figure — Buchanan’s work prizes the illusory power of the human form in and of itself. Some facial expressions approach Messerschmidt’s excess, yet in the simple, lovely portrait “Between the Distance,” a girl’s alert regard and slightly open mouth, perhaps about to form a word, are vividly subtle. 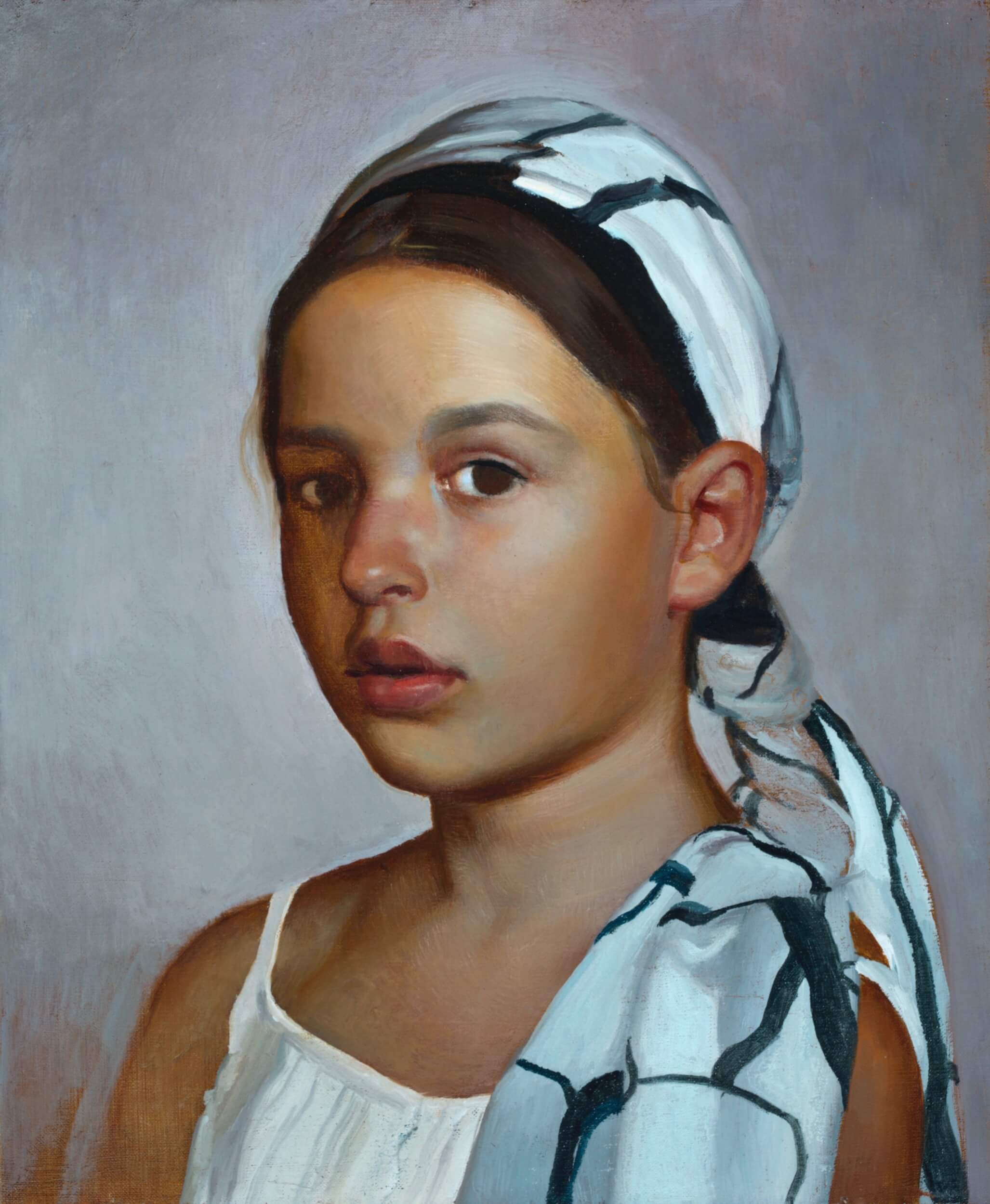 Noah Buchanan, Between the Distance, 12 x 10, oil on canvas (courtesy of Dacia Gallery)

In “The Melancholic Painter,” a confusing web of figures congest before a dream-like backdrop. The weight of quotidian demands, embodied in their plastic form, enclose the protagonist, who would rather be painting. The title of the show indicates he also longs for the iconographic certainty past painting enjoyed. 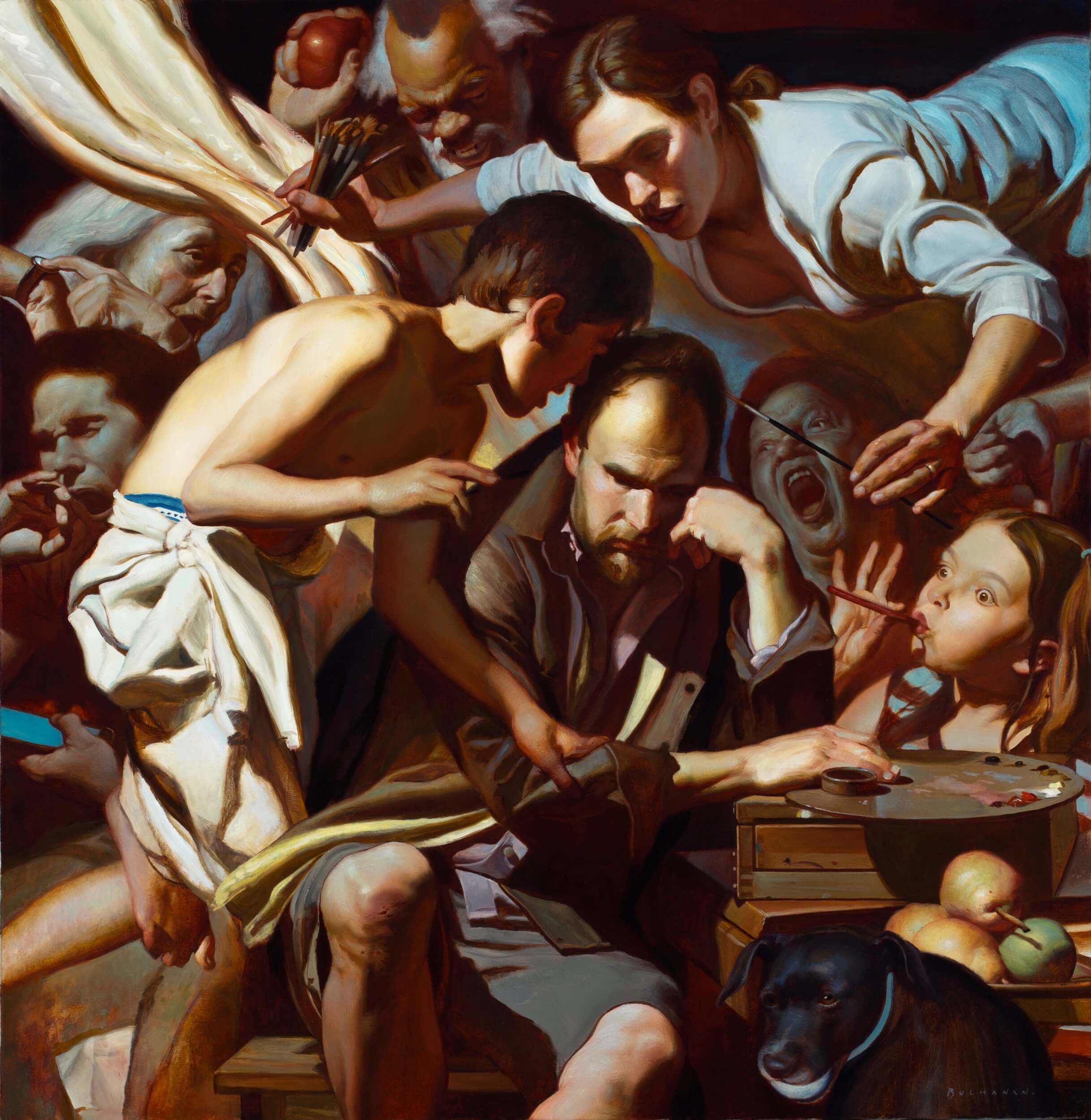 Buchanan’s ambiguous configurations, as in the inexplicable ”Entombment,” are no doubt impelled by normal, daily cyber-dislocations. Like Manet’s awkward social constructions — genre scenes featuring self-consciousness — disjointed content prevails. In Manet’s “The Old Musician,” assembly in the banlieue (pre-suburban 19th c. Paris outskirts between city and country) prefigure Symbolism’s ‘characters in search of an author’. Neither the Realists nor the Symbolists could know that academic training itself would become suspect following the 20th century mess figuration found itself in, suffering Aryan delusions and totalitarian proto-history painting. 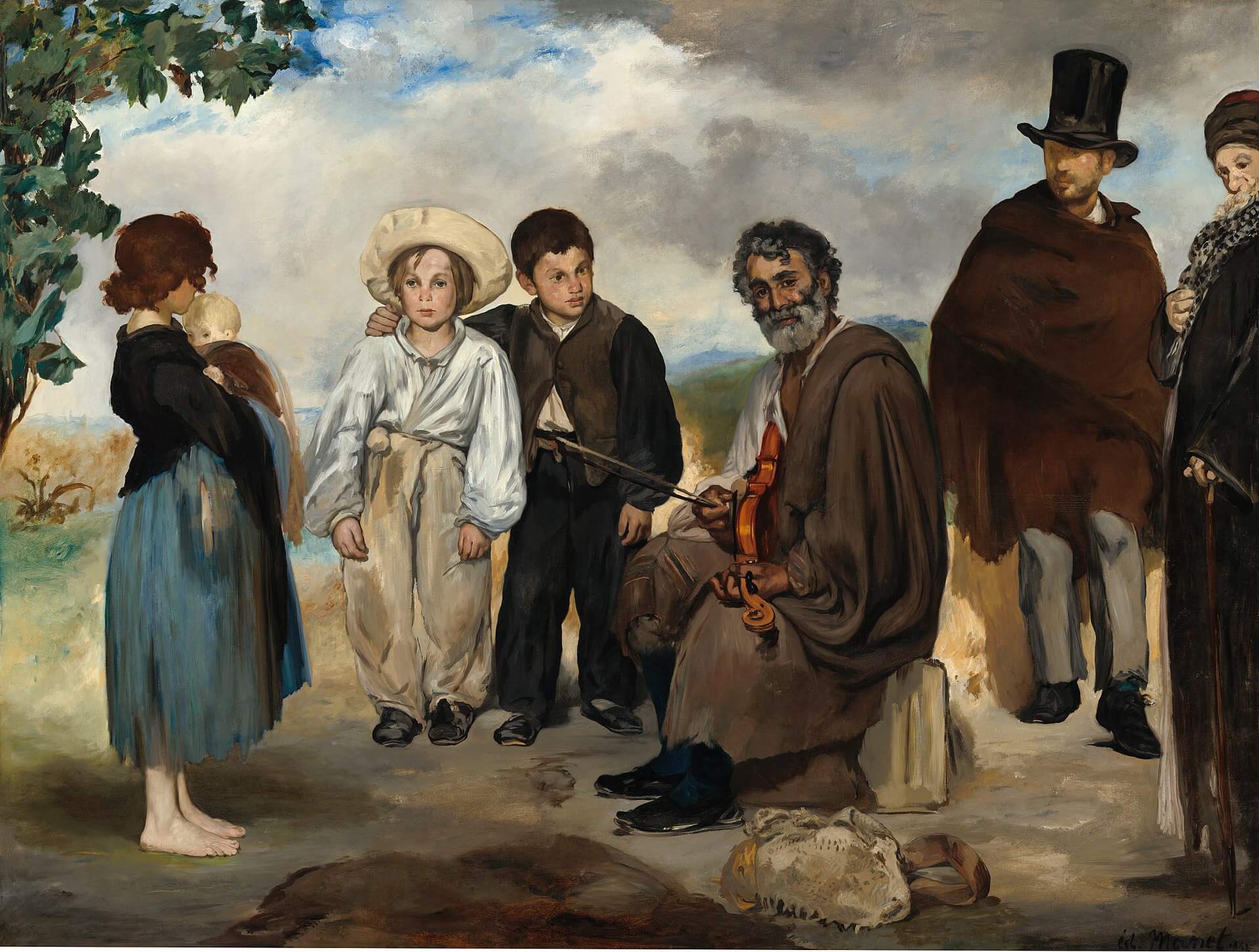 Those ideologically isolating days are history, and virtuoso figure painting, the body being so central to human experience, will always have adherents. Accentuating the immediacy of the hand-held through closed-form drawing (like early Velázquez) — fruit, dishes, a hat, a turtle, a palette and brushes, a boat, a figure — Buchanan heralds mimetic painting’s surprise. Albeit more impressive than moving, the magical display of rendering form from flatness underlines the primary power of all painting. 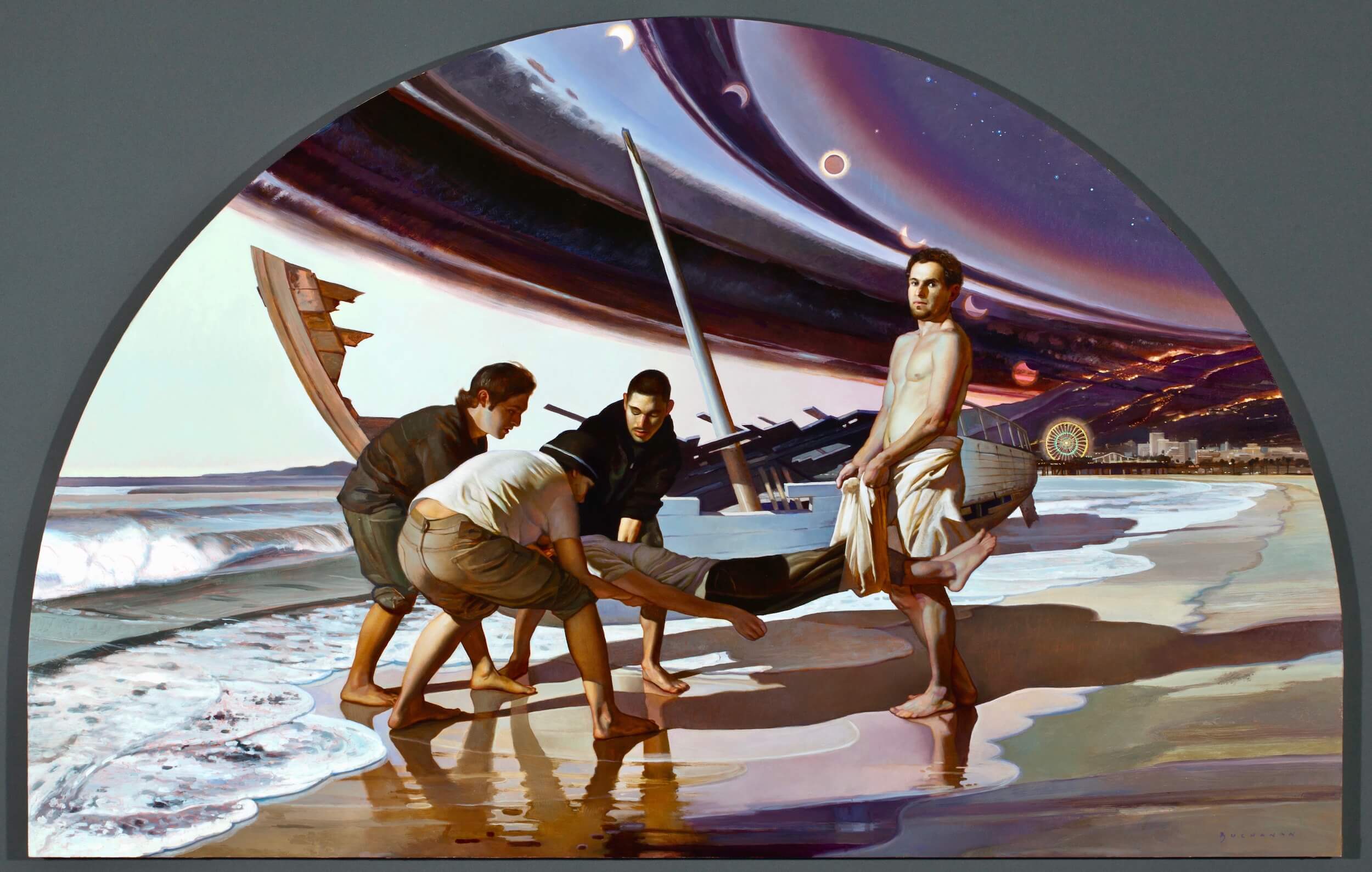 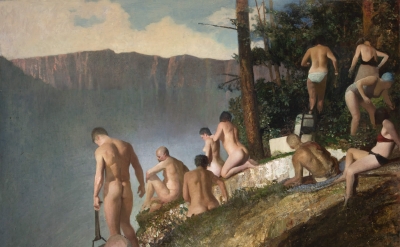 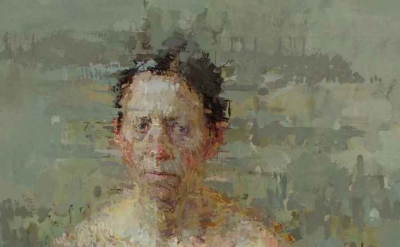 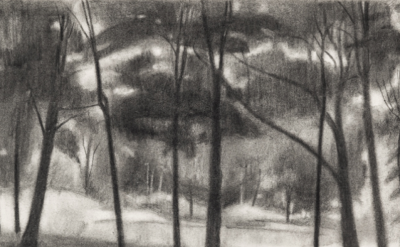