Submitted by Brett Baker on December 20, 2011.
Click photos to enlarge:

Artist/teachers from Thomas Eakins to Robert Henri and Charles W. Hawthorne have played an important role in shaping generations of American artists. From the mid-century and into the post-war period Josef Albers had a great and lasting influence on American art. His famous color exercises, collected in the seminal text The Interaction of Color, were published in 1963 with the help of his students.

During Albers’ long tenure at Yale he taught countless artists, many of whom became renowned artists and influential teachers, themselves. The new exhibition Re-Generation looks at “three generations of painter-teachers" and "traces the regeneration of thought in painting and art education by linking the translation of visual ideas" - ideas that trace back to the teaching of Josef Albers.

Painter and professor Carrie Patterson who conceived of and curated the show agreed to answer a few questions about the exhibition, which opens January 5, 2012 at The Painting Center in New York.

PT: Although the exhibition embraces influence, the work in the show is strikingly diverse. Harold Bloom’s “anxiety of influence” doesn’t seem evident. What do you think this says about Albers’ teaching and about teacher student dialogue in general?

CP: Making art has always been a collaborative process. If someone scanned history it would be hard to find an artist who was not part of a larger dialogue involving issues of aesthetics and the role of art and its manifestation. Simply by opening our eyes, ears, and hearts we are influenced by visual, cultural, and historical experiences. During his lifetime, Albers influenced many aspiring artists, but he also trained teachers.

I think he trained teachers to have respect for students and to require that students know the craft of making an object. The teachers that graduated from Yale during that time are theorists and build work conceptually. They have passed on both of these attributes to their students and are excellent at their craft.

The initial idea for this show started with origin and collaboration in mind. I was teaching and found books to help me teach drawing much more readily than painting. Painting is mysterious and teaching painting is a challenge. Drawing is, too, but you can find places to start. With painting, I found myself remembering what my former teachers did or said. I realized if I was doing that, maybe my teachers were, too, and that led me to Albers and the idea for this show. I am not talking about Albers' color class, just to be clear. I am talking about the whole package. I wanted to know about the time when Albers was teaching at Black Mountain. What was different there than at Yale? What ideas were floating around?

I read the Fred Horowitz and Brenda Danilowitz book: To Open Eyes, and my student research assistant, Brittany Sigley, and I spent a few days going through the archives at the Albers Foundation. I read so many wonderful letters, interviews, lectures, and listened to the transcripts of interviews with students that Fred Horowitz conducted. Albers' words and actions are remembered so well by his students because he was not afraid to talk about the importance and power of art in our society. Plus, he was direct. He wasn’t afraid of offending someone. He just said what was not working or wrong and expected that you would fix it and move on.

Through the research process I learned that Albers was committed to teaching the basics. Many art schools and artists have reinterpreted basic to mean boring or formulaic or non-contemporary but, actually, basic just means you know your craft. You can make what you want to make. No one would ever dream of sending a web designer into the world without teaching them to understand code. Painting is the same - and for painting, basic proficiency does not happen in a year or two. It takes many years to understand the craft.

PT: Certainly when we think of Albers we think of color theory, and it seems the artists in the show have absorbed and passed on a sophisticated color sense. What other, subtler aspects of Albers’ influence manifest themselves in the works in this exhibition?

CP: What I see in the exhibition is freedom. I see artists who know a certain set of rules and they have learned those rules extremely well. Within that given set, they are able to embrace improvisation, spontaneity, reductivism, beauty, and the absurd - all using a similar set of rules.

I also see a search-and-find a  way of working where nothing is taken for granted. All the artists question things they find - basic things – like a vertical line, or a thread, or a piece of masking tape, or taxi cabs or birds on an electric wire – and they push the idea of material manifestation into something else. Sometimes this becomes structural like in Lois Swirnoff’s work, and sometimes this creates a narrative situation like in Ron Markman’s work. One commonality I see is that all the artists are dealing with dichotomies – is it this or is it that – a playfulness with construction and perception.

PT: You studied with Robert Slutzky, a student of Albers. How does the combined influence of Albers and Slutzky influence your own work and approach to teaching? 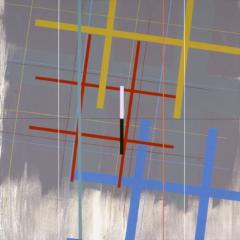 CP: The combination of my training in abstract, schematic thinking and my perceptual training at the New York Studio School has shaped the type of teacher and artist I am. When I was an art student, I had many supportive teachers: Barbara Grossman, Rosemarie Beck, and Robert Slutzky to name three. During my first meeting with Bob, I shared with him that my family lived in Switzerland. I talked about some of the buildings I had seen and loved. We had an intense conversation about what I knew and didn’t know – ranging from Goethe to Paul Klee. I remember now that I also saw an Albers Retrospective on my first trip to Switzerland. And, of course, I know now that in my undergraduate design courses and drawing courses many of the exercises were Albers-based - plus I had the traditional color theory class. So Albers was always in my cone of influence so to speak!

Later on I was lucky to be Bob’s TA for his collage/color course during my second year at Penn. At the same time, there was a retrospective show of Bob’s work in the Arthur Ross Gallery. I now realize that this experience was a rare gift. By observing his teaching methodology and experiencing his work at the same time, I saw and heard how his teaching overlapped with his own painting practice. When he talked about the possibility of “tipping space,” I contextualized this idea within a framework of shared visual knowledge. When he talked about embracing the flatness of a plane, I understood the implications of schematic space in relation to his discussions with architecture students.

Bob encouraged me to stop looking at the surface of a building and start exploring the structure. He also gave very practical advice on how to paint a painting, and I do the same for my students. I talk about brushes, paint, other tools that might be useful. I think everyone should know how to work the tools in the woodshop before they graduate. If you can’t find your way around the studio and can only talk about painting, then you are going to have a hard time getting started.

Bob also encouraged students to take classes in other disciplines to understand contemporary art. “You've got ten paintings in one – take a break and try to figure out why you are painting.” His advice shaped the type of teacher and painter I would become. As I develop my own courses at a liberal arts institution, I include information and ideas from many disciplines. My color theory course includes teachings of Albers, but it also includes color from the perspective of a physicist, musician, historian, and psychologist. My drawing class includes walking through architecture and learning, not only about the structure and surface, but also the history embedded in the building, and the fictions that lie beneath. Bob Slutzky expected you to not only challenge yourself but to challenge him. 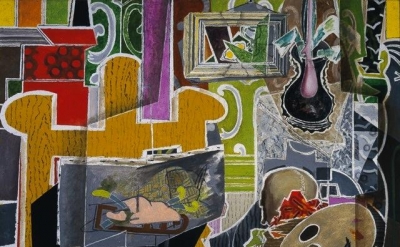 The Blogroll is here...