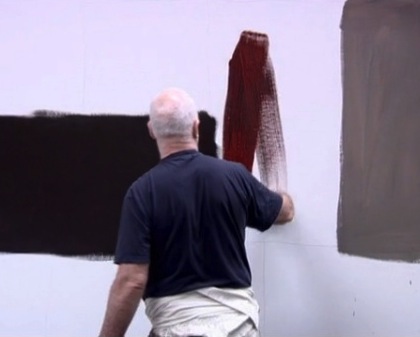 Michael Rutherford discovers a great trailer for the documentary film Sean Scully: The Bloody Canvas, produced by Yellow Asylum Films for RTE, directed by Alan Gilsenan with photography direction by Richard Kendrick. The film mixes audio interview with footage of Scully working in his studio.

As the film begins, Scully remarks: "In my kind of art, and in a lot of performance art, where people use their bodies strenuously, there's a definite relationship between physical exertion and a kind of spirituality, so that you reach an elevated sense through this physical committment that you make, and the idea of work and craft and committment and effort all come together in a kind of revelation."